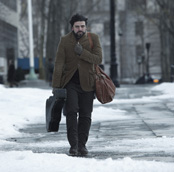 5 stars for Inside Llewyn Davis & Buster Keaton’s The General mean €5 Prosecco today ONLY at the IFI!

The Coen brothers are back with another witty, beautiful and insightful film which masterfully evokes the folk music scene of New York in the 1960s with Inside Llewyn Davis. Also released today is one of the great achievements of the silent era, Buster Keaton’s The General, in which one man’s love is divided between his fiancée Annabelle and his locomotive. It’s a film filled with breathtakingly dangerous stunts performed by Keaton himself, all in the service of laughter.

Both films open at the IFI today to a slew of 5-star reviews and, to celebrate, the IFI Café Bar is offering a glass of Prosecco for just €5 all day today, Friday January 24th!

PRAISE FOR INSIDE LLEWYN DAVIS:

“Beautifully acted by all, wondrously scored by T Bone Burnett, Inside Llewyn Davis is the gift of comic seriousness: the kind that keeps on giving.” ★★★★★ The Irish Times

“It is a beguilingly studied period piece from America’s early-60s Greenwich Village folk scene. Every frame looks like a classic album cover, or at the very least a great inner gatefold…”. ★★★★★ The Guardian

“This is not an easy film, and the brothers themselves have joked that it has no plot, but what it has in spades is poetry, and a tragi-comic grandeur” ★★★★★ The Irish Independent

Greenwich Village, 1961: Llewyn Davis (Oscar Isaac) is a struggling musician relying on the kindness of others during a New York winter. Penniless and embittered, he trudges the streets with a guitar strapped to his back and the unwanted burden of a friend’s cat he has unwittingly let escape. His tense relationship with harmonising duo John (Justin Timberlake) and Jean (Carey Mulligan), and an experience with gnarly jazz hipster Roland Turner (John Goodman), give Llewyn cause to think he’ll be better off joining the Merchant Navy than pursuing his dreams of greatness… BOOK NOW

Watch the trailer for Inside Llewyn Davis:

PRAISE FOR THE GENERAL:

“Every image and sequence is iconic: the bound-and-gagged damsel; the hero listening in as the bad guys outline their plans in detail; his saluting the troops with one hand while he embraces his girlfriend with the other.” ★★★★★ The Irish Times

“With his athleticism, precision and comic timing, Keaton more or less invented the action movie” ★★★★★ The Guardian

The General
In The General, one of Buster Keaton’s best known and most loved films, and his own favourite, he plays Johnnie, a Southern railway engineer whose love is divided between fiancée Annabelle and his locomotive. When the American Civil War begins, Johnnie rushes to join the Confederate Army, but, as an engineer, he is more valuable in his current position, a fact not explained to him. Annabelle mistakes his failure to enlist as cowardice, and refuses to speak to him again until he is in uniform. Circumstance brings them together a year later, and Annabelle is a passenger on The General when Union soldiers steal it from Johnnie, forcing him to give chase and rescue his beloved… BOOK NOW

Watch the trailer for The General: