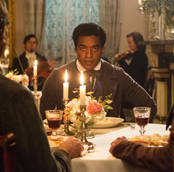 And, to celebrate this slew of 5-star reviews, the IFI Café Bar is offering a glass of Prosecco for just €5 all day today, Friday January 10th!

Chiwetel Ejiofor and Michael Fassbender both deliver outstanding performances in a film that has been called the most vivid and authentic portrayal of American slavery ever captured on screen. This is a work of immense power, a harrowing, unflinching examination of one of the greatest crimes against humanity, featuring a superb cast and indelible imagery.  BOOK NOW