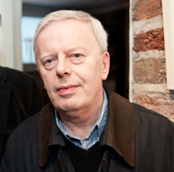 The IFI is pleased to announce the Pete Walsh Critical Writing Award, a new annual award that is inspired by the late, esteemed IFI programmer. Pete Walsh, who passed away in December 2012, was a central figure at the IFI for 18 years, building an internationally admired film programme, and hugely enriching cinema exhibition and appreciation in Ireland.

IFI Director Ross Keane said: “Last December our dear friend and colleague Pete Walsh passed away. For his anniversary this month, we wanted to mark his passing and legacy. After numerous discussions with Pete’s colleagues and family, two areas consistently emerged that Pete was passionate about – good film writing and seeing as many movies as possible. Because of this, we decided to merge the two and, this December, we are pleased to announce the Pete Walsh Critical Writing Award. We hope this Award will be a fitting tribute to a man who was so passionate about film and shared that enthusiasm with everyone he met.”

Chair of the Judging Panel Tony Tracy said ‘We are delighted to inaugurate this Award in memory of a friend and great cinephile who shaped the experience of film for so many in Dublin and beyond.’

Bridget Mulvey, Pete’s sister, said ‘Throughout Pete’s career he nurtured many young people’s appreciation of film, many of whom continue to work in the field. This Award is a fine way for the IFI to continue to honour his legacy.’

The Pete Walsh Critical Writing Award will be awarded annually to an outstanding piece of critical writing on any one film theatrically screened in Ireland during the previous calendar year (in this case 2013). The winner will be selected by a judging panel consisting of four of Pete’s many friends from the film industry Tony Tracy (Huston School of Film & Digital Media, NUI Galway), Kevin Coyne (Irish Film Institute), Gráinne Humphreys (Jameson Dublin International Film Festival) and Professor Neil Sinyard.

The winning entry will be published in the IFI monthly programme and on the IFI website, while the winner will receive a year’s free entry to films at the IFI.

The closing date for entries will be 5pm on Friday 28thFebruary 2014 and entry is open to anyone resident in Ireland. There is a maximum word count of 1250 words but the IFI anticipates many entries will be more concise. The focus is on film appreciation and criticism rather than academic analysis. It is essential that entrants read the full competition rules and submission guidelines which are available on the IFI website at www.ifi.ie/writingaward.