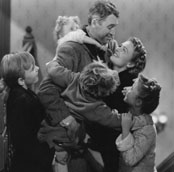 Christmas Crackers at the IFI

No other event in the calendar has inspired cinema like Christmas and every film fan has their favourite Christmas film. This December the IFI is screening a great selection of Christmas classics, perfect whether you’re taking a break from the shopping, making a special outing with friends or family or warming up with a mulled wine in the IFI Café Bar.

It’s a Wonderful Life, Frank Capra’s evergreen classic is required viewing at this time of year and is re-released from 13th December. James Stewart is at his most likeable as family man and generous friend George Bailey, in a tough spot on Christmas Eve. Fortunately an angelic higher power intervenes and the subsequent revelations weave a spell so heart-warming that even the most cold-hearted Scrooges can’t withstand. An angelic presence is also a feature of Henry Coster’s 1947 The Bishop’s Wife (Dec 22nd 16.10 & 23rd 18.15), this time in the form of suave Dudley (Cary Grant) guiding the Bishop (David Niven) but finding relations with mortals more complicated than expected.

Judy Garland fans have long found their Christmas fix in Vincente Minnelli’s 1944 musical Meet Me in St. Louis (Dec 20th 18.15 & 21st 16.00). Beloved musical numbers, in particular Garland’s rendition of Have Yourself a Merry Little Christmas, have ensured it remains a Christmas staple.

Michael Curtiz’ White Christmas (Dec 21st & 23rd 13.30) also features a treasury of songs by Irving Berlin (including of course the eponymous mega-classic). Featuring Bing Crosby, Danny Kaye, Rosemary Clooney and Vera-Ellen, this story of a two pairs of entertainers getting tangled up in love is a must for any musical fan.

Those looking for something cute and cuddly should definitely avoid Gremlins which will be screened in luscious 70mm on Dec 17th at 18.30. Joe Dante’s blend of black comedy and horror set against a Christmas backdrop, established Gizmo and chums as iconic monsters of the 1980s.

So whether you want to relive the triumph of community in Bedford Falls, get a guaranteed White Christmas with Bing Crosby, or go to the dark side with a 70mm screening of Gremlins there’s something for everyone this Christmas at the IFI.

For more information or images please contact Patrick Stewart at the IFI Press Office on 01 679 5744 or email pstewart@irishfilm.ie.