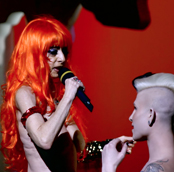 Irreverent counter-culture and electro icon Peaches welcomes you to the cinematic spectacle Peaches Does Herself. The Irish premiere of this sexually-charged, semi-autobiographical rock-opera, consisting of songs from the artist’s delightfully obscene back-catalogue takes place on the 15th December at 20.30 and coincides with her triumphant return to Dublin.

From the opening scene where the Naked Cowboy (65 year-old Sandy Kane) emerges from a giant neon symbol of female fertility, to the final, fade-out performance of one of Peaches’ irreverent smash hits tunes performed aboard a bicycle in Berlin, Peaches Does Herself will delight both disciples and the uninitiated alike.

“Peaches Does Herself tells the story of a young woman who, inspired by a 65-year-old stripper, begins to make sexually forthright music. Her popularity grows and she becomes what her fans expect her to be: transsexual. She falls in love, but gets her heart broken and then ventures on a path of self-discovery.”

To round off the film in style, Peaches herself will be on hand for a very special Q&A after the screening. The icing on the Christmas cake will be Peaches DJ set plus live performance as part of club night Partie Monster in The Button Factory from 11PM.

Tickets for this special screening are on sale NOW at the IFI Box Office, online at the IFI website, or on 01 679 3477

Watch the TRAILER for Peaches Does Herself

For more information and images please contact Patrick Stewart at the IFI Press Office on 01 679 5744 or email pstewart@irishfilm.ie

Tickets for Peaches’ DJ set at The Button Factory are available now from ticketmaster.ie.

In association with GCN and Partie Monster