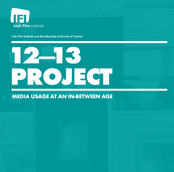 The need for support for young people in Ireland in negotiating and successfully interacting with myriad media platforms available to them fell under the spotlight today with the publication of the 12-13 Project Report by IFI Education. The report , which was funded by the Broadcasting Authority Ireland, highlights the enthusiasm and engagement of the 12-13 age group with both new and more traditional media, and the wide array of skills that this key age-group already have. It also lays down a blueprint for educators to help children develop these important skills.

Launching the report Alicia McGivern, Head of Education at the Irish Film Institute said ‘This is a fast moving area but with the growing importance of media platforms in everyone’s life and especially as new media is the preferred communication tool for young people in Ireland it’s vital that educators find ways of enhancing these skills so they can employ them more creatively and responsibly whilst promoting a culture of online safety. The 12-13 Project Report both shows how Irish children are engaging with the media already in day-to day life and developed five pilot projects that worked with local media like Ocean FM and RTÉ, to show how children’s enthusiasm can be even more fired up by engaging with the ways in which media content is being created –one of Ireland’s major industries.’

Speaking about the launch, Bob Collins, Chairperson of the Broadcasting Authority of Ireland said “Technology has begun to make possible ways of viewing and listening to programming not addressed in current broadcasting legislation. For this reason the BAI recognises the importance of fostering relationships and partnerships with other bodies, such as the IFI, which will further our strategic goal of empowering audiences. It is through building competence that audiences can interact with and participate in the media environment, which is why the BAI was particularly pleased to work with IFI Education and to support the ‘12-13 Project’”.

The 12-13 Project: Media Usage at An In-between Age used Media Logs to survey at the ways that 12-13 year-olds are using the media. Results showed that while the typical 12-13 year-old already has a 3G/Wi-Fi enabled phone used for texting, surfing and social networking. 12-13 year-olds are using YouTube and Facebook, even though the latter has an official age bar to under-13s. They watch an hour of television a day but this is trumped by the average 65 minutes a day spent on their games console. As this age group is at a key junction in their education – moving from primary to secondary school, media skills can facilitate this transition to new subjects, new learning styles and situations.

The five pilot projects for improving media literacy focused on working with local media content providers such as Ocean FM, RTÉ Young Peoples, Frameworks Films and web developers Gaelscéal. These innovative collaborations map out a way for educators to develop local links with content creators to help build media skills for the next generation children, not just as consumers but active young participants in media culture, seizing creative opportunities.

It’s hoped that the report will continue to impress upon the Department of Education, teacher trainers, educators and parents of the need to continue building media literacy skills into the curriculum and extra-curricular educational opportunities. With such a high rate of media usage, at different skills levels, it’s important that out-of-school media skills are given an outlet in school learning.

For more information , the full report, images or interview requests please contact Patrick Stewart at the IFI Press Office on 01 679 5744 or email pstewart@irishfilm.ie.