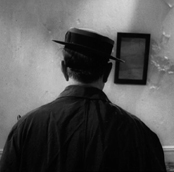 IFI International, the Irish film programming service for international exhibitors, and the Experimental Film Club present the launch of Absences and (Im)Possibilities on Tuesday, November 12th at 18.30 at the IFI. The programme of Irish experimental film works commissioned by IFI International and curated by Esperanza Collado, Aoife Desmond, Donal Foreman and Alan Lambert, will then be made available to national and international venues and festivals.

The programme features a selection of films from 1897 to 2013, chosen for their relation to the possibility of an Irish experimental cinema. Filmmakers include the Lumière brothers, Samuel Beckett, Vivienne Dick, Clare Langan, Maximillian Le Cain and Dónal Ó Céilleachair. It will also include this month’s free Archive at Lunchtime films, J.N.G. Davidson’s By Accident and Bob Quinn’s Self Portrait with Red Car.