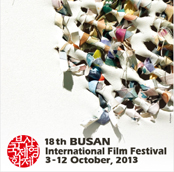 The Irish Film Institute is proud to support Irish filmmakers taking part in a cultural trade mission which aims to raise the profile of Ireland, Irish culture and the Irish film industry in Korea and the Asian market.

The 18th Busan International Film Festival (BIFF) runs until Saturday October 12th and a host of Irish filmmakers are participating in a major international focus on Ireland and the Irish film industry. Ireland has been selected as the National Cinema spotlight at the festival, which operates the ‘Asian Film Market’ (one of the largest film markets in Asia), with a programme called Rogues, Rebels and Romantics: A Season of Irish Cinema. The delegation hopes to use this focus to raise the profile of the Irish film industry within Asia.

IFI International worked with the Bord Scannán na hÉireann/Irish Film Board to provide the retrospective titles for the festival including providing prints from the IFI Irish Film Archive, co-ordinating print transport and rights clearance, and providing marketing materials.

Award-winning directors Jordan and Sheridan will be honoured at a special hand-printing ceremony during the festival to mark their lifetime contribution to the international film industry. They will be joined by Irish actor Pat Shortt and directors Lance Daly, John Butler and Brendan Muldowney. The season will feature a total of 11 Irish films including Jim Sheridan’s In America and In the Name of the Father and Neil Jordan’s The Crying Game and Michael Collins, alongside the Academy Award winning Once and John Boorman’s The General. New films selected as part of the lineup include Life’s a Breeze, The Stag and Love Eternal.

The full line up of films playing at the festival is as follows: