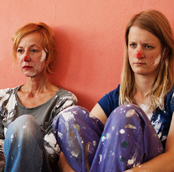 One of Europe’s most active and admired film cultures, German cinema is in rude health with a wealth of new talent on display at IFI Kinofest, this year’s celebration of new German film. Four of the five films selected are first features from their respective directors and all are names to take note of in years to come. Whether set in stylish contemporary Berlin or revisiting the still inescapable psychological backdrop of WWII, all these films are linked by a common thread of struggling to define relationships.

IFI Kinofest opens with André Erkau’s Life is No Piece of Cake, a tragicomic drama that follows just-widowed father Markus’ attempt to repair his relationship with his runaway daughter. The film deals with its subject with a light touch, deftly using humour to keep any cheap sentimentality at bay.

The complexities of modern family life are explored further in The Strange Little Cat, a minimalist and brilliantly-observed delight which studies a young family as they potter around their Berlin apartment preparing for a dinner party, and Dust in Our Hearts, a largely-improvised and very credible portrait of a young woman trying to balance her identity as a single mother, a dependent daughter and an actress still motivated by dreams of artistic success.

Franziska Schlotterer’s provocative debut Closed Season is set in the Black Forest in 1942 where childless couple Fritz and Emma shelter Albert, a Jewish man, from the Nazis on their isolated farm. The backdrop of WWII may be familiar, but the increasingly complex emotional foreground of friendship, surrogacy, desire and prejudice between the three characters transcends its setting.

Dumped by his girlfriend and humiliated by his psychiatrist, a chance encounter with a former schoolmate he once tormented might help Oh Boy’s protagonist Niko end the day well, if he can avoid messing things up as he usually does. Winner of numerous awards at this year’s German Film Awards including Best Film, Best Screenplay and Best Actor, this stylish monochrome comedy is an engaging debut that bodes well for its director’s future.

Tickets for IFI Kinofest are available now from the IFI Box Office on 01 679 3477 or online atwww.ifi.ie. Full details of all the films are available on the website.

For more details and images please contact Patrick Stewart at the Irish Film Institute on 01 679 5744 or pstewart@irishfilm.ie

IFI Kinofest is presented in partnership with the Goethe-Institut Irland.