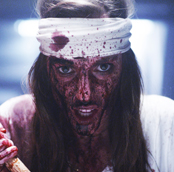 IFI Horrorthon returns 24-28th October for five full days of blood-soaked, demon possessed, machete-wielding horror film derangement including; Jeremy Lovering presenting his claustrophobic nightmare In Fear; the hotly-anticipated Odd Thomas; an everyday family of cannibals in the We Are What We Are remake, and a 30th anniversary of David Cronenberg’s seminal Videodrome

IFI Horrorthon 2013 is packed full of so much spine-chilling scary movie greatness that Dublin will be sleeping with the lights on and the door locked till Christmas. Running from Thursday October 24th-Monday October 28th, it’s a Bank Holiday weekend that will be etched into your nightmares for years to come. Now in its 16th reincarnation, this unrivalled feast of fright film features a staggering 25 Irish premieres including first-looks at some major upcoming horror releases, gems of the international horror scene that you won’t see anywhere else, the finest anniversary screenings of vintage horror classics, and special guest Jeremy Lovering , director of the Opening Film In Fear.

A member of the programming team Lorcan Dillon Kelly said ”This year marks the sixteenth annual event, and what a sweet sixteen it is with a dynamic range of exciting new premieres, classic retrospectives and a terrific showcase of short films from upcoming filmmakers all over the world”

A young couple get lost driving at night, in the woods, where a malevolent stranger waits. Breathlessly claustrophic and nail-scrapingly tense, the hotly-anticipated upcoming release In Fear is a suitably chilling way to start this year’s festival. Definitely a director whose name you should remember, Jeremy Lovering will introduce the film and take part in a post-screening Q+A.

Hot on its heels is the long-awaited U.S remake of 2010’s international hit from Mexico We Are What We Are. Get a sneak peak at this savagely realistic contemporary family of cannibals who try to adapt and find new supplies after their father’s death. The film premiered at Cannes this year to a fantastic reaction; a Cannes-ibalistic treat that promises to match or exceed the terrifying original.

Another highlight of programme is undoubtedly Odd Thomas, Stephen Sommers’ adaptation of the Dean Koontz novel of the same name. A young short-order cook in the California desert has clairvoyant powers and senses disaster is approaching. Those who have seen it on the festival circuit have called the film as one of the best horrors of the year, so it’s absolutely not to be missed.

Those lucky enough to catch Scream Queen Danielle Harris at Horrothon 2012 get another chance to see her return as Marybeth in a Louisiana bayou in Hatchet III. And there’s another female lead in Delivery, as Laurel Vail plays a first-time mother to be convinced the pregnancy has a malevolent spirit in a story which brilliantly evokes but never imitates a classic of the genre, Rosemary’s Baby.

IFI Horrorthon never neglects the dark and twisty family tree of horror and 2013 is no exception. Classic fright delights making a return to the big screen include a 30th Anniversary screening David Cronenberg’s masterful Videodrome that sees James Woods drawn into a horrifying conspiracy that plans to use the media to control the population. Another 30th Anniversary is due for John Carpenter’s Christine that brilliantly adapts Stephen King’s novel and captures the truly unhealthy bond between man and a red and white 1958 Plymouth Fury. Tom Savini’s remake of Romero’s Night of the Living Dead remake has incredibly never had a theatrical screening in Ireland before; catch it here in a Double Bill with Romero’s own outstanding Creepshow.

What’s the Surprise Film going to be? If we told you, we’d have to kidnap you until it was over, and we can’t do that anyway because only one man knows the film’s name. But rest assured this time-honoured slot is gearing up to be something special.

The weekend ends with another highlight. Big Bad Wolves, IFI Horrorthon’s Closing film is a stylish and complex revenge thriller which sees a rogue cop and a grieving father teaming up to ‘interrogate’ a serial murder suspect. Classic stuff and a fitting last cry of terror before IFI Horrorthon lurches back towards its never-peaceful resting place for another year.

The full programme is available at www.ifi.ie/horrorthon or pick up a festival flyer at the IFI.

Special Festival passes are available for 1-5 days and can be booked at the IFI Box Office or on the phone on 01 679 3477. Tickets for all individual screenings are available NOW and can also be booked online at www.ifi.e/horrorthon