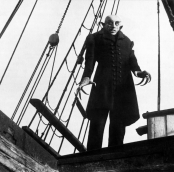 Are you looking for something spooky on Halloween? We’ve released tickets for our Double Bill screening of F. W. Murnau’s classic Nosferatu (18.30) and Werner Herzog’s Nosferatu The Vampyre (20.30) on Thursday, October 31st!

The first screen adaptation of Bram Stoker’s Dracula, F.W. Murnau’s Nosferatu  retains its chilling power. It is one of the most enduring films of the silent era, a classic example of German expressionist cinema, hugely influential on the horror genre and beyond. Recently restored by the Friedrich Wilhelm Murnau Foundation in Germany, Nosferatu returns to the cinema accompanied by its original score.

In Werner Herzog’s Nosferatu The Vampyre, Bruno Ganz and Isabelle Adjani are both excellent as the Harker couple, with Klaus Kinski as Count Dracula getting close to the iconic portrayal by Max Schreck. One thing that distinguishes the two films is that Kinski is a far more sympathetic vampire, with Herzog curious to explore the figure’s inherent loneliness and melancholy, making a film that is both scary and sad.

Both films will be released at the IFI for a limited run in late October.