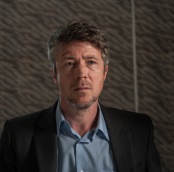 This Friday sees a release of Mister John, a new drama  from Christine Molloy and Joe Lawlor, starring Aidan Gillen of Game of Thrones and Love/Hate fame.

The second feature from the team behind Helen, Mister John confirms Lawlor and Molloy as original and distinctive filmmakers. With a story involving snakebites, Asian superstition and dream sequences, it has a hallucinatory and poetic edge. It is an elegant, smart film with a wry and winning sense of humour and Aidan Gillen is mesmerising as a man falling apart at its centre.

We were delighted to welcome cast & crew to the IFI earlier this month to a preview screening of Mister John, followed by a Q&A with Director Joe Lawlor and star of the film, Aidan Gillen, hosted by Artistic Director of Dublin Theatre Festival Willie White. Listen back to our podcasted interview.