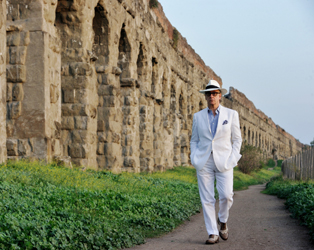 It’s another 5-star Friday at the IFI with four films opening today to rave reviews.

Paolo Sorrentino’s much-anticipated The Great Beauty is a dazzling mix of Fellini and Greenaway that nonetheless remains unmistakably the work of its director, and cements his place among leading European filmmakers.

“Sorrentino’s camera literally dances around its themes and through the streets of the world’s most sacred city in a film so packed with images and ideas it will keep you thinking for days and weeks afterwards” ★★★★★ Paul Whitington, Irish Independent

A breakthrough feature for director-writer David Lowery, Ain’t Them Bodies Saints was immediately celebrated as special after its premiere at Sundance earlier this year, when breathless reviews made effusive comparisons to Altman and Malick.

“Everything tastes a bit like Terrence Malick these days… And who can complain when we get films that employ the influence so intelligently as the bewitching Ain’t Them Bodies Saints?“★★★★★ Tara Brady, The Irish Times

The latest film from renowned documentarian and film-essayist Jem Cohen (Benjamin Smoke, Chain), Museum Hours is a charming rumination on art and observation, featuring striking images that appear to have been captured casually and with engaging, perfectly pitched performances from Bobby Sommer and Mary Margaret O’Hara as characters meeting at a crossroads in their lives.

“It’s both quiet and talky, sad and exalting. I loved its scrupulousness… Museum Hours is that rare thing: a movie about high art that’s not only nice if you can afford it.”  ★★★★★ Antonia Quirke, The Financial Times

Now restored and reappraised, and showing EXCLUSIVELY at the IFI, Bonjour Tristesse reveals itself as a treasurable delight. Depicting the life of jet-setting socialites on the French Riviera in glorious CinemaScope, Jean Seberg plays the free-spirited Cécile, the teenage daughter of rich playboy Raymond (David Niven), who fears for her comfortable lifestyle when Raymond plans to marry his late wife’s best friend, Anne (Deborah Kerr).

“Otto Preminger’s 1958 movie version of Françoise Sagan’s scandalous novel has the potency and force of a compelling morality tale” ★★★★★ Peter Bradshaw, The Guardian

Both The Great Beauty and Ain’t Them Bodies Saints will be two of three films discussed in our FREE monthly film club, The Critical Take, on Thursday, September 26th at 18.30. Come along and share your views with our panellists and fellow film fans!