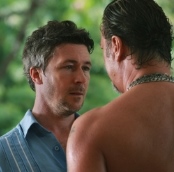 Hot off the press! We’re delighted to announce a preview screening of Mister John, with star Aidan Gillen in attendance, followed by a Q&A with filmmaker, on September 17th at 18.30!

The second feature from the team behind Helen and the acclaimed Civic Life film programme, Mister John confirms Christine Molloy and Joe Lawlor as original and distinctive filmmakers. With a story involving snakebites, Asian superstition and dream sequences, it has a hallucinatory and poetic edge. It is an elegant, smart film with a wry and winning sense of humour and Aidan Gillen is mesmerising as a man falling apart at its centre.