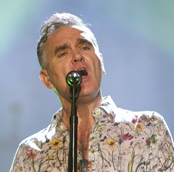 In advance of the release of Morrissey 25: Live  exclusively at the IFI, Eoin Devereux writes an IFI Blogpost about Morrissey’s Latino/Chicano Fans:

In the early 1990s a fan subculture focused on Morrissey emerged in the eastern suburbs of Los Angeles.  Undoubtedly inspired by Morrissey’s own relocation to Los Angeles, the Chicano/Latino fan subculture played a significant role in reviving his career in commercial terms.  The Chicano/Latino fan subculture has attracted widespread media interest.  Such media coverage has tended to focus on what it perceives as its cult-like, fanatical and obsessive aspects rather than seeing it as I do as a really interesting example of fan creativity.

The Latino/Chicano fans localize certain aspects of fan culture associated more generally with Morrissey. This is in evidence in dress code e.g. mimicking Morrissey’s earlier Rockabilly style; tattoo artwork; t-shirts with slogans like ‘Mexican Blood/American Heart’ and ‘Moz Krew: LA from Westside to the South Bay’. A group of Mexican immigrants play in a Smiths/Morrissey tribute band called Sweet and Tender Hooligans.  As a tribute to their (anti) hero, Morrissey’s Chicano/Latino fans have re-named their adopted hometown as ‘Moz Angeles.’ 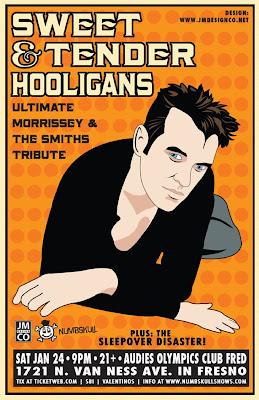 Many of his Chicano/Latino fans refer to how his songs have strong redemptive qualities, often describing their icon in quasi-religious terms.  One fan told documentary maker Kerri Koch in her film Passions Just Like Mine (2010) “What appeals to me most about Morrissey is his look on life… how there can be a depressing side but still find hope and live life to the fullest I guess” with another stating “His music is the soundtrack of my life, he reaches my innermost thoughts and fears and aspirations and longing. For a long time, I felt isolated and alone. Only Morrissey comforted me.”

The Chicano/Latino subculture is an obvious example of the glocalizing tendencies of popular culture.  Morrissey’s own status as the outsider’s outsider and particularly his second generation (Irish) immigrant and lapsed Catholic status are obvious points of connection between him and his Chicano/Latino fans.  His singing style has been compared to the Mexican ‘Ranchera’ genre and he has engaged directly with Chicano/Latino experience in songs like ‘The First of The Gang to Die’ and ‘Mexico’. Morrissey’s authenticity and ambiguity allows for a wide range of fan interpretations of his work.  His Latino/Chicano fans, as is in evidence in Morrissey 25: Live demonstrate the sheer scale of passion that fans have for this most reluctant and controversial icon.

Dr. Eoin Devereux is Senior Lecturer in Sociology at University of Limerick.  He is the co-editor of the book Morrissey: Fandom, Representations and Identities (Intellect Books: 2011).