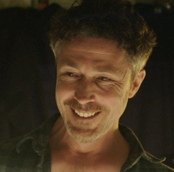 Aidan Gillen to visit IFI for a preview screening of Mister John that also features a Q+A with director Joe Lawlor on 17th Sept at 18.30.

The IFI is to host a special preview of Joe Lawlor and Christine Molloy’s film Mister John on Sept 17th at 18.30. The second feature from the Desperate Optimists duo behind Helen and the acclaimed Civic Life film programme, Mister John confirms Lawlor and Molloy as original and distinctive filmmakers. Lawlor will take part in a post-show Q+A while Aidan Gillen (The Wire, Game of Thrones, Love/Hate) will be present to introduce the film.

Mister John follows Gerry Devine (Gillen) as he travels to Singapore where his estranged brother, a bar owner who has possibly been involved in nefarious activities, has died in a drowning accident. It emerges that Gerry is running away from his own problems at home, and, as he becomes more immersed in a foreign culture and environment, taking on his brother’s mantle becomes appealing to him. The trouble is he is not exactly a suitable substitute for the dead man.

A story involving snakebites, Asian superstition and dream sequences, it’s a film that has a hallucinatory and poetic edge. Mister John is an elegant, smart film with a wry and winning sense of humour and Aidan Gillen is mesmerising as a man falling apart at its centre.

Mister John runs at the IFI from September 27th