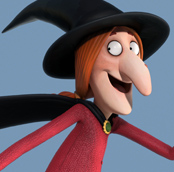 Take a trip around the world this summer with the IFI Family Festival. It’s packed full of stories of flight and invention, that won’t be shown in cinemas anywhere else in Ireland. With films from so many countries, this year is a truly international festival so the IFI have introduced a special Festival Passport – pick it up at the IFI Box Office and get a stamp for each country that you see on film during the Festival. And there’s no need to worry about children keeping up with the subtitles- all the subtitled films will be read aloud in English by an experienced reader.

IFI Foyer will be taken over on the Opening Night for Flights of Fantasy: a series of special, free activities around the Festival themes of flight and invention . Where would you fly if you could anywhere? What could you invent with skill and imagination? After the activities it’s time for popular children’s presenter Diana Bunici from RTÉ Young Peoples to open the festival in style with the Opening Film Room on the Broom + Other Animated Tales (Ages 5+). It’s the latest animation from the makers of The Gruffalo and The Guffalo’s Child that sees a kindly witch and her animal friends taking flight on a broomstick to have an adventure with a dragon!

Highlights of the festival for older children include The Rocket (Age 10+, winner of the Crystal Bear at this year’s Berlinale) a truly heartfelt story from Laos about a boy who is believed to bring bad luck to his village but aims to prove everyone wrong by entering a dangerous competition at The Rocket Festival. Also for older children is the inspirational Satellite Boy (Age 10+), the story of an Australian boy fighting to save his Outback home using the Aboriginal ways his grandfather Jagamarra has taught him.

Younger children will enjoy Zarafa (Age 6+), that tells of a boy bringing a baby giraffe across the North African desert and then all the way to Paris, and an award-winner at the Annecy International Festival of Animation winner, Poppety in the Fall (age 6+), about a grumpy hedgehog who loves books.

Those looking to get a lot of stamps on their Festival Passport should come to one of the two Short Tales screening, featuring the best short films and animations from around the world – Programme 1 is aimed at those aged 5+ and Programme 2 is perfect for children aged 8+. Short Tales 2 will be a chaperoned screening where, for the first time, parents who are bringing their children to Poppety in the Fall, can drop their older child to this supervised screening.

In another new initiative this year, one of the screenings of the Austrian film Das Pferd auf dem Balkon (A Horse on the Balcony – Age 8+), about a young boy trying to save his four-legged friend, will be an autism-friendly screening that will be introduced by actor Laurence Kinlan (Love/Hate, The Guard), a friend of Irish Autism Action.

Two classic children’s characters will be featured during the Festival. Peter Rabbit (Age 3+) will hop onto the big screen on Friday 12th and will follow a Beatrix Potter storytelling session from Bláthnaid Ní Chofaigh in conjunction with RTÉjr and Tell Me a Story. The much-loved tale of Dumbo (G cert) and his over-sized ears will be followed by a look at a real elephant webcam of Dublin Zoo’s Kaziranga Forest Trail and a chance to learn how they look after their Asian elephants.

The IFI Family Festival always has a great selection of workshops that give young cinema fans an insight into the way films are made. This year there’s We Stop Motion (Ages 10-12) which offers a chance to learn about animation and have a go at making your own; Trickery (Ages 9-12) which looks at the science of 3D and film in collaboration with the Science Gallery’s Illusion exhibition; and Put a Bird on It! (Ages 7-10), a crafty and fun workshop which looks at how to design your own squirrel or bird character.

Other events include a free Pop-Up cinema in the IFI Foyer, Foyer activities for ages 5+, and if there’s a budding cinema projectionist out there then don’t forget to enter the competition to join Nisan, the Head Projectionist at the IFI in the Projection Booth, as he projects the closing night film Satellite.Just email schools@irishfilm.ietelling the team why it should be you!

Full details of the festival programme are online at www.ifi.ie/familyfest or pick up a flyer from the IFI.

Children under 12 must be accompanied by an adult (except chaperoned screening of Short Tales 2).

Subtitled screenings (indicated in the schedule below by an asterisk) will be read aloud by an experienced reader.

For more media information, interview requests and high-res images please contact Patrick Stewart at the IFI on 01 679 5744 or email pstewart@irishfilm.ie.