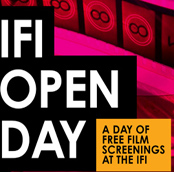 Alongside these special previews there’s also a great collection of classic favourites including Al Pacino and Robert De Niro in The Godfather Part II (1974); the unforgettable film debut from Natalie Portman alongside Jean Reno as the eponymous hit-man in Léon (1994); one of the classic early incarnations of favourite cult-movie-monster Godzilla (1954); and one of Japanese master filmmaker Akira Kurosawa’s acknowledged masterpieces, a perceptual maze of feudal-era suspense and mystery in Rashomon (1950).

Alongside the better-known classics, IFI Open Day always brings some rarely-seen gems coming back to the big screen. Charles Burnett’s seminal classic of African-American cinema, Killer of Sheep (1977), has been compared to Italian Neorealism and was made for less than $10,000. Very few have seen Stanley Kubrick’s anti-war feature debut Fear and Desire on the big screen, but it’s full of promise of what was to come and a must-see for his fans.There’s a chance to see footage from the Heroic Age of Antarctic Exploration and, in particular, preparations on Ross Island for Captain Scott’s doomed expedition to the South Pole in Herbert Ponting’s The Great White Silence (1924). Another rarely-seen classic and one for the whole family, is IFI Family’s selection The 5000 Fingers of Dr. T. (1953) – the only feature film that Dr. Seuss ever wrote.

There will also be a chance to vote for a screening of another favourite from the past year in the poll for this year’s Audience Choice screening. The shortlist of 10 films – all released at the IFI since the last IFI Open Day – has been collated from a poll of members of the IFI staff – but the public will decide whose selection will triumph. Audiences can vote for their favourite where they will also find IFI staff members’ championing their own choices.

Tickets for all films will be distributed IN PERSON ONLY at 11am on June 15th at the IFI. Tickets will not be available online or by phone. There is a maximum of four tickets per-person-queuing, strictly allocated on a first-come-first-served basis.

11 Things you need to know for the IFI Open Day queue.

1. Get there early. To be first in the queue, you’d need to be up with the lark on Saturday 15th June. Tickets are distributed from 11am on the day and there’s no advance booking. In previous years queue toppers have marked their territory on Eustace Street from 7am.

2. Don’t knock student films. Charles’s Burnett’s 1977 film Killer of Sheep was submitted as his MFA thesis at the School of Film at UCLA. The film remained unreleased for 30 years because of music rights issues but, after a major restoration project, it was finally released in 2007 and has now been declared a national treasure by the U.S.A’s Library of Congress. Not bad for a film school project.

3. Not all sequels are rubbish. Francis Ford Coppolla’s The Godfather Part II was the first sequel ever to win the Oscar for Best Picture. In another Oscar first (and last), Marlon Brando and Robert De Niro are the only two actors to win an Oscar for playing the same character, Vito Corleone, albeit not in the same film.

4. You can get a second chance at your big break….as long as you are 11 years old and Natalie Portman. She was originally turned down by Casting Director Todd M. Thaler for the part in Léon but came back to the auditions to impress director Luc Besson. Watch her audition reel here.

5. One Thousand Eight Hundred and Six. That’s how many FREE tickets that will be given away during IFI Open Day. Each person in the queue can select a maximum of FOUR tickets each. You can have four for one screening or one for four screenings. As special deals go, that is a pretty good one.

6. That subjectivity is everything …in Rashomon. So much so that  critics and psychologists have used this brilliant 1950 drama about one crime being recounted differently by four different characters to coin the term ‘the Rashomon Effect’ of different plausible accounts of the same event – think Pulp Fiction or the new series of Arrested Development.

7. The name of the Audience Choice Poll Winner. By the time you are in the queue, the winner will already have been announced. You can vote for your favourite from the IFI Staff’s shortlist of the last year’s new releases online at the www.ifi.ie from Friday 7th June.

8. There is a shortcut to film buff kudos. Even serious Stanley Kubrick fans will be impressed when you tell them you have ve seen his anti-war feature debut Fear and Desire in a cinema. That’s in no small part because Kubrick discouraged retrospective screenings, even allegedly buying up all the available prints he could find. Do say ‘you can actually see amazing classics at the IFI all year’. Don’t say ‘miles better than Barry Lyndon.’

9. There’s still no short-cut to the South Pole. But it’s a got a whole lot easier since Captain Scott’s doomed 1924 mission to the Antarctic. Filmmaker Herbert Ponting accompanied the expedition as far as Ross Island, making The Great White Silence-that features Scott’s team in training – before poignantly being filmed pushing off towards the Pole.

10. There’s no better (or cheaper) time to become an IFI Member. On IFI Open Day there’s a special €5 discount on annual IFI Membership so you can get a free off-peak ticket; year-round discounts at the IFI Box Office, the IFI Café Bar and the IFI Film Shop; and the draw for the free monthly Member’s Preview for just €20 (€10 concs). Or pick up an IFI Best Membership for just €89 (€10 off). For the full list of the fantastic benefits of IFI Annual Membership (as well as the Terms and Conditions) see the IFI Membership page on the IFI website.

11. ‘Today was Good, Today was Fun, Tomorrow is Another One’ When Dr. Seuss wrote that he wasn’t talking about IFI Open Day which is only happening on Saturday June 15th in 2013. It’s also you and your family’s chance to see the only feature film he wrote, The 5000 Fingers of Dr.T, which has a piano so big that you need 500 boys to play it!