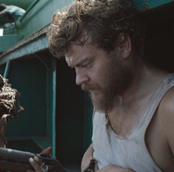 Maritime Piracy Event at the Opening of A Hijacking

To celebrate the release of A HIJACKING in Irish cinemas on Friday 17th May, a special panel discussion regarding maritime piracy, ongoing security concerns, the psychological impacts on victims and their families plus the economic effects on a major international industry will take place after the 6.30pm screening at the IFI in Temple Bar, led by Newstalk’s Philip Molloy, film correspondent with The Right Hook on Newstalk Radio for the past 11 years and currently presenter of the weekly movie programme, The Picture Show.

A tense, chilling drama following the emotional journeys of a ship’s crew as they are taken hostage in the Indian Ocean, A HIJACKING was the standout film at 2012 Venice and Toronto Film Festivals and stars familiar faces from Borgen and The Killing.

Joining the panel will be former hostage Chirag Bahri, a Marine Engineer whose world was turned upside down when his vessel was hijacked by Somali pirates for 8 months in 2010 and who has since devoted his career to seafarer welfare; Gary Porter an ex-services Corporate Security Manager for Clipper Group who has worked on resolving real-life hijacking situations and appears in A Hijacking as a negotiator; John Toner, President of the Irish Chamber of Shipping and Mark Cameronof Ardmore Shipping in Cork who have had one of their vessels boarded in 2010.

The story contrasts the experience of Pilou Asbæk’s sympathetic, kidnapped cook sweating it out alongside his fellow crew members on board the ship with Søren Malling’s no-nonsense CEO understandably trying to resist giving in to the demands of the hijackers. Lindholm calibrates every move in the anxious negotiations with assured precision and documentary-style veracity to this study of the price of principles and the source of human courage.

Tickets for this special opening night event and for the release of A Hijacking are available now from the IFI Box Office online at www.ifi.ie, in person or on 01 679 3477.

For more information regarding A HIJACKING and interview requests please contact Siobhán Farrell, Eclipse Pictures – siobhan@eclipsepictures.ie or Patrick Stewart at the IFI Press Office pstewart@irishfilm.ie or 01 679 5744