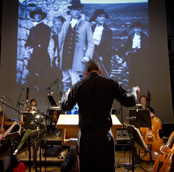 Catch Willy Reilly and His Colleen Bawn before the international tour

The IFI presents a Pre-Tour Dress Rehearsal of Willy Reilly and His Colleen Bawn, accompanied by the CinéTheatre Ensemble, before a major international tour of three EU capital cities.

The IFI is giving Dublin audiences a unique opportunity to see the eleven-piece CinéTheatre Ensemble performing the Pre-Tour Dress Rehearsal of Bernard Reilly’s magnificent new score for one of the few Irish films to survive from the silent era, Willy Reilly and His Colleen Bawn, at the IFI on June 5th at 18.30. The CinéTheatre Ensemble then embarks on a tour of three prestigious cinemas in Paris (Cinema Le Balzac, 10th June 8.30pm), Berlin (Kino Babylon, 8thJune 8pm) and Madrid (Ciné Dore, 12th June 7.30pm). The tour is presented by the Irish Film Institute as part of the International Culture Programme, Culture Connects, to celebrate Ireland’s Presidency of the Council of the European Union, and is supported by Culture Ireland and the Arts Council.

Willy Reilly and His Colleen Bawn, a Romeo-and-Juliet-style tale set in 18th century Ireland tells the story of Willy Reilly, a Catholic gentleman in love with Helen Folliard, the ‘Colleen Bawn’. She loves him in return but she is the daughter of the local Protestant squire, and so their love is thwarted by the plotting of the film’s villain, Sir Robert Whitecraft, who wants the Colleen Bawn and Willy Reilly’s land for himself.

Directed by John MacDonagh, brother of Thomas, one of the executed leaders of the 1916 Rising, the film is filled with historical and political resonance, and was filmed in the grounds of St. Enda’s School where Thomas had taught alongside its founder Patrick Pearse. The film is now preserved in the IFI Irish Film Archive.

Composer and conductor of the CinéTheatre Ensemble, Bernard Reilly, has recorded with many international names, including the London Philharmonic, Andrew Lloyd Webber and The Corrs. As a composer his music feature in a number of acclaimed films and documentaries, including A Soldier’s Song, The Gamble and The State We’re In for RTÉ Television. Bernard has composed and orchestrated for the RTÉ Concert Orchestra including Gráinne, performed in major venues across the USA. He also spent many years in London’s West End playing in shows including Blood Brothers (original company), Cats, The Phantom of the Opera and Starlight Express.

Tickets for the Pre-Tour Dress Rehearsal of Willy Reilly and His Colleen Bawn are available at usual IFI prices now from the IFI Box Office in person, by telephone on 01 679 3477 or online at www.ifi.ie.

For more information, to request an interview with Composer and Conductor Bernard Reilly, sound clips or images please contact Patrick Stewart at the IFI Press Office on +353 (1) 679 3477 or pstewart@irishfilm.ie.