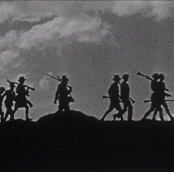 IFI International brings Guests of the Nation (1935) to the Barbican, London

The story of an unlikely friendship between British soldiers and their IRA captors during the Irish War of Independence is told in Guests of the Nation (1935), a silent film presented by the Irish Film Institute with live orchestral accompaniment at the Barbican, London at 4pm on April 14th. Tickets are available now from the Barbican.

The Irish Film Institute’s IFI International programme presents the 1935 Irish silent film Guests of the Nation at the Barbican, London with live orchestral accompaniment of a contemporary original score from IFTA award-winning composer Niall Byrne at 4pm on April 14th. This landmark Irish cultural event in London is part of EU-wide programme of Irish film events from IFI International to celebrate Ireland’s Presidency of the Council of the European Union which continues until June 2013. It is supported by Culture Ireland’s Culture Connects programme.

Guests of the Nation is an extraordinary gem within a small canon of Irish silent features. Directed by playwright Denis Johnston, this moving anti-war film is based on Frank O’Connor’s story of friendship between British soldiers and their IRA captors. Featuring early screen performances from Shelah Richards (then Johnston’s wife);  a youthful Cyril Cusack; the Oscar-winning Barry Fitzgerald; the Gate Theatre’s Hilton Edwards; and a cameo from Frank O’Connor himself, this is an elegant and compassionate critique of Irish Nationalism from the post-Independence period.

The score will be conducted David Brophy, Principal Conductor of the RTE Concert Orchestra. The film and score were premièred at Ireland’s National Concert Hall in September 2011 and later that month screened at New York’s Alice Tully Hall to great public and critical acclaim.