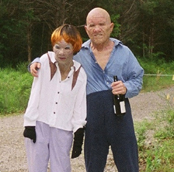 Haromony Korine, a cutting-edge and controversial cinematic voice, is examined in the Harmony Korine – Breaking Out  season at the IFI from 3rd- 14th  to coincide with his new film Spring Breakers with James Franco and Selena Gomez

Despite a relatively small output, Harmony Korine has established himself as a unique talent in contemporary American cinema. His films focus on the inhabitants of the margins of society, ignored by the mainstream but rendered with affection and empathy in Korine’s defiantly and uncompromisingly personal aesthetic. In the words of the great critic Roger Ebert, Korine is ‘the real thing, an innovative and gifted filmmaker whose work forces us to see on his terms’

Korine first came to mainstream attention as the writer of Larry Clark’s Kids, a cause célèbre for its unflinching depiction of sex, violence and substance abuse among teenagers but his debut as a director came two years later with Gummo (1997), which laid down the unmistakeable, but always surprising, Korine style of filmmaking; non-linear, abstract, and peppered with the absurd and the surreal. Greeted with outrage and walkouts, some people took notice with Bernardo Bertolucci claiming it ‘created a revolution in the language of cinema’ and Werner Herzog hailing Korine as ‘the future of American cinema’.

Julien Donkey-boy (1999) followed and was the first American films made according to the rules of Dogme 95. A Korine take on the dysfunctional family drama, untreated schizophrenic Julien (Ewen Bremner) provides the perspective for an investigation into the misery of his family- pregnant sister Pearl (Chloë Sevigny), brother Chris and domineering Father (Werner Herzog)

Mister Lonely(2007) followed an eight year absence and for the first time saw Korine use established actors and working with a much larger budget. In some senses it’s a warmer and more straightforward film than his previous work (if a film about a group of celebrity impersonators living in the Scottish Highlands can, in any sense, be straightforward), though it still contains the moments of beauty that Korine finds in the most unlikely places.

Trash Humpers (2009) returned to a lo-fi style with VHS-shot, guerrilla film Trash Humpers. The film follows a group of sociopathic elderly people (Korine and friends in masks) in Nashville as they go about their usual nightly business of mayhem and vandalism, as well as simulating sex with rubbish bins. Trash Humpers defies all rules and conventions and it confirmed Korine as a filmmaker of undoubted and singular talent and imagination. Also showing in the season is The Fourth Dimension (2012), an intriguing anthology film following an eccentric set of rules and featuring a Korine segment with Val Kilmer as the star.

The retrospective season accompanies the cinema release of the keenly awaited Spring Breakers on 5th April. Four teens, including former Disney starlets Vanessa Hudgens and Selena Gomez, trying to get enough cash together to join in the ultimate hedonistic beach party in Florida; at first glance it seems typical mainstream fodder. Not so, instead the film is a melancholy study the desperate search for validation and identity and the soulless underside of American life captured in a day-glo aesthetic. This may be Korine’s most subversive film yet.

Spring Breakers is on release from Friday 5th April.

Tickets are available for the Harmony Korine- Breaking Out at the IFI from Thursday March 28th on 01 679 3477 or online at www.ifi.ie