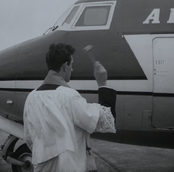 IFI National presents Euro-Paeans: Celebrating Ireland and Europe in Film, a touring programme of films featuring Sackville Street in 1897, Heinrich Böll causing a stir in 1961, winter sun flights in 1963, missionaries marching out in 1967 and a Polish school in Galway in 2012.

With Ireland’s Presidency of the Council of the European Union running until June 2013, IFI National, with the support of the Arts Council, is touring a programme of short films drawn from the collections of the IFI Irish Film Archive. Euro-Paeans: Celebrating Ireland and Europe in Film explores representations of Ireland in European films and of Europe in Irish films. At a time when Ireland’s relationship with Europe will be at the forefront of national debate, this programme will spark some lively debate and reflection in communities all around the country.

The programme includes a rare chance to see some of the first films made in Ireland from 1897 by the pioneering French company Les frères Lumière. This selection of short glimpses of 19th Century Ireland includes scenes of Dublin’s O’Connell Street (then Sackville Street) and firemen’s manoeuvres in Grafton Street and are the oldest films preserved in the IFI Irish Film Archive.

Heinrich Böll, the famous German travel writer, caused controversy in 1961 when he wrote the screenplay for the film Irland und seine Kinder. The film reveals Böll’s deep affection for the Irish but also his dismay at their profound insouciance. When shown in Ireland there was an outcry, leading one critic to ask for an apology from the German government – it will be interesting to see if Böll’s criticisms still have the power to provoke.

Ireland’s fascination with Europe is seen in a selection of Amharc Éireann cinema newsreels directed by Colm O Laoghaire for Gael Linn. The selected reports include an exhibition of photographs of the then newly constructed Berlin Wall in 1962; the first Aer Lingus Winter sunshine flight to Malaga in 1963; a Scandinavian Ceremony of Light; and an exchange programme for French and Irish school children. Other highlights of the programme include The Saints Went Marching Out (1967) which celebrates the spread of Irish missionary activity in Europe; a look back at Ireland as a vibrant young country in Ireland’s Presidency of the E.E.C in 1979; and Tribulations Irlandaises a whirlwind tour of Ireland by a French film crew in 1965 noting its people’s pious adherence to the Catholic Church under Eamon deValera and Sean Lemass.

If your organisation, however large or small, would like to arrange screenings of the Euro-Paeans Programme please contact Aoife McElwain at IFI National by emailing amcelwain@irishfilm.ie