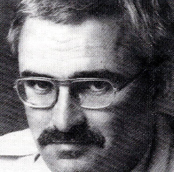 The IFI and the Jameson Dublin International Film Festival (14th-24th Feb) continue their series of annual collaborations with two programmes; one celebrating the films of the seminal Irish filmmaker Kieran Hickey (1936-1993) that are preserved in the IFI Irish Film Archive, and the other showcasing the work of Jem Cohen, a New York based filmmaker with a strikingly original body of work that reflects the spirit of independent filmmaking in its original sense.

Sunniva O’Flynn, IFI Curator , said ‘Kieran Hickey was one of Ireland’s most sophisticated and versatile filmmakers – as accomplished in his production of elegant literary documentaries as he was in his direction of a series of exceptional short fiction films . These literary adaptations and dramas explored sexuality, infidelity, and middle-class angst for the first time in Irish cinema and challenged notions of nationalism, sectarianism and the glorification of the past’

The tribute programme features four of Hickey’s films screened as two double-bills. The first includes Exposure, a group’s encounter at a remote hotel with a French photographer that turns sour, and Criminal Conversation, in which a Christmas Eve party in Dublin degenerates into a kind of Irish Who’s Afraid of Virginia Woolf? The second double-bill features the work of two great Irish writers on sectarianism; Attracta from the William Trevor short story of violence, grief and madness and The Rockingham Shoot which was scripted as an original work by John McGahern on the sectarian impact of a country pheasant shoot. Both programmes will be introduced by Kieran’s friend, theatre director Patrick Mason.

Grainne Humphreys, Festival Director of Jameson Dublin International Film Festival, said ‘Jem Cohen is an original, a fascinating New York artist whose boundless curiosity ranges across multiple subjects and styles, music videos, art films, documentaries and fiction with terrifying ease. We are delighted that he will participate in an skype conversation with Michael Connerty ( DLIADT) after the Irish premiere of his latest film, the wonderful Museum Hours.’

Jem Cohen’s career has spanned three decades and his dozens of films in different formats defy conventional categorisation. He may be best known for his collaborations on music videos, concert films and documentaries with such artists as Patti Smith and REM, but equally powerful are his experimental films of urban landscapes. The Jem Cohen Retrospective includes two programmes of shorts that include films made in Italy, Pamplona, Tangier, a selection from New York and a short portrait of Patti Smith.

Jameson Dublin International Film Festival is also presenting two ‘Reel Art’ films at the IFI, Natan by David Cairns and Paul Duane and Broken Song by Claire Dix. Both are supported by the Arts Council’s Reel Art scheme that gives film artists a unique opportunity to make highly creative and imaginative documentaries on an artistic theme.

Tickets for the Jem Cohen Retrospective and the IFI Irish Film Archive : A Tribute to Kieran Hickey are available from the IFI Box Office on 01 679 3477 or online at www.ifi.ie.

Tickets for all Jameson Dublin International Film Festival events are available from the JDIFF Box Office on 01 687 7974 or online at www.jdiff.com

For more information on the Jem Cohen Retrospective or the Reel Art screenings please contact Jenny Sharif at JDIFF on press@jdiff.com or +353 1 662 4260

The IFI and Jameson Dublin International Film Festival acknowledge the financial support of the Arts Council.