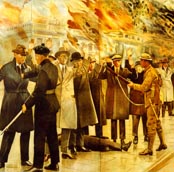 IFI International, with the support of Culture Ireland, is teaming up with cultural partners across the EU to mount a major programme of Irish film during Ireland’s EU Presidency running from January – June 2013. This wealth of activity includes screenings of historic Irish films such as Guests of the Nation, Irish Destiny and Willy Reilly and his Colleen Bawn from the IFI Irish Film Archive accompanied by scores from contemporary Irish composers in Paris, London, Berlin, Madrid and Brussels; a major focus on Jim Sheridan featuring both his work and influences; a season of the best contemporary Irish documentary; programmes of Irish shorts, and much more.

Sunniva O’Flynn, IFI Curator, said ‘While continuing to service over 40 festivals of Irish film around the world during 2013, we are bracing ourselves for an exciting 6 months in Europe when, thanks to the generous support of Culture Ireland, we will bring a range of contemporary and historical films from the Irish cinema canon to new audiences. It’s a pleasure to work again with Jim Sheridan and to present the films which have inspired and influenced him which will appear in his carte blanche selection at the Belgian Cinematek. We particularly welcome the chance to bring a series of cine-concerts to prestige European venues where the talents of contemporary Irish composers Mícheál Ó Súilleabháin, Niall Byrne and Bernard Reilly will complement the achievements of directors from the silent era.”