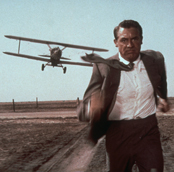 The Genius of Hitchcock: Part Three

The IFI’s complete retrospective The Genius of Hitchcock continues in February with this month’s highlights including many of Hitcock’s most popular films The 39 Steps, Notorious and North by Northwest

February’s instalment of the Great Hitchcock Retrospective once again gives a chronological overview of his long career, starting in the British Silent era (Champagne)through to the end of the 1960s in Hollywood (Topaz). Tracing Hitchcock’s development as one of the key auteurs is a fascinating exercise and as American scholar Paula Cohen said “to study Hitchcock is to find an economical way of studying the entire history of cinema.”

February’s films have been broadly grouped into three different thematic strands by the BFI; ‘Secret Agents’, ‘Hitchcock’s Odysseys’ and ‘Dead Funny’. The ‘Secret Agents’ films speak for themselves, with the world of spies forming an important component in Hitchcock’s arsenal of suspense stories. Secret Agents are hiding in films such as Secret Agent, Torn Curtain and the ultra-intense spy thriller Notorious that for François Truffaut was ‘the quintessence of Hitchcock’.

‘Dead Funny’ brings Hitchcock’s strong comic strain into focus, noting that the comedy is often in disturbing association with violence, with films such as Champagne, Rich and Strange, Mr and Mrs Smith, and perhaps the definitive film for this category, Hitchcock’s comedy about a corpse found in the autumnal country side, The Trouble with Harry.

‘Hitchcock’s Odysseys’ refers to the recurring motif of spectacular journeys brought to perfection in North by Northwest. The first of Hitchcock’s best period North by Northwest features Cary Grant, as misidentified bystander suddenly plunged into the deep end of a national security threat and forced to go on the run. The riveting journey takes Grant across the country dodging crop dusters, the U.N General assembly, and being chased across the Mount Rushmore monument. A perfectly crafted celebration of all the pleasures of classical cinema, this is an absolutely unmissable big-screen event.

Beyond North by Northwest there’s no shortage of quality in the Hitchcock’s Odysseys category with riveting gems such as The 39 Steps, a brilliant and fast moving-journey from London to Scotland and back, capturing the political tensions of the 1930s along the way; Saboteur that brings the war in Europe to the heart of America just after the U.S entered the war with a struggle against pro-Nazi forces that takes its hero right across the continent; and Young and Innocent which shows a young woman defying the law to go on the run with another Hitchcock’s falsely accused men.

Complementing the season, February’s free IFI Afternoon Talk on Feb 11th will be given by Jo Botting, a Curator at the British Film Institute’s National Film Archive, on Alma Reville, Hitchcock’s lifelong spouse and key creative collaborator. A talented editor and screenwriter, Reville’s input into Hitchcock’s films is now receiving wider critical recognition and also becoming more visible to the public through her recent portrayal on screen by both Imelda Staunton and Helen Mirren.

Tickets for The Genius of Hitchcock are available now from the IFI Box Office on 01 679 3477 or online at www.ifi.ie.

The Genius of Hitchcock – Screening Schedule

For more media information and images please contact Patrick Stewart at the IFI Press Office on 01 679 5744 or pstewart@irishfilm.ie