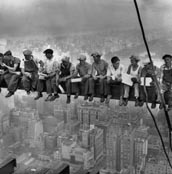 Men at Lunch to screen at the IFI from 1st Feb

Taken in 1932, Lunch Atop a Skyscraper is the famous image depicting eleven steel workers perched on a girder 850ft above Manhattan during construction of the Rockefeller Centre.

The photographer and subjects remained unknown for the past 80 years, but in 2007 a chance discovery of a special framed copy of the photograph in Whelan’s pub, Shanaglish, led brothers Eamonn and Sean Ó Cualáin to tell the remarkable story of two of the men photographed on the beam in their new IFTA-nominated documentary Men at Lunch which is released at the IFI and cinemas nationwide from 1st Februrary.

Enquiring why it had pride of place on the wall, they learned from publican Michael Whelan that the photograph had come from a Boston-area man named Pat Glynn, who was convinced that his father and uncle were in the photograph.

What was known for sure was that both men had emigrated from Shanaglish in the 1920’s, and that they had found construction work in New York’s burgeoning skyscraper industry.Narrated by actress Fionnula Flanagan, Men at Lunch presents groundbreaking new research into the history of the photograph itself alongside the extraordinary story of two Irish emigrants who went to New York in search of work and became immortalised by the skyline they helped to build. One of the hits of the Galway Film Fleadh in 2012, this fascinating documentary finally tells the story one of the most iconic photographs ever.