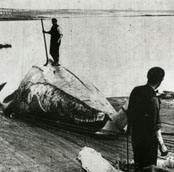 IFI National brings two Mayo films home to Castlebar on 5th February, for A Mayo Ciné-Concert featuring a series of films that includes footage from Foxford Woollen Mills from 1947 and the Whaling Station at Iniskea from 1908.

IFI National brings a programme of cinematic treasures from the IFI Irish Film Archive home to Mayo this February for a magnificent evening of film, music and memories. Following on from the successful screening of The Seasons in 2011, a live accompaniment will be provided by Colm and Rossa Ó Snodaigh of Kíla and harpist Cormac de Barra who will use instrumental, percussive, foley and vocal elements to produce a dynamic fusion of traditional and contemporary music. The event takes place at the Linenhall Arts Centre on 5th February at 8pm.

Sunniva O’Flynn, IFI Curator, said ‘IFI National are delighted to be coming back to the Linenhall Arts Centre with these films from the IFI Irish Film Archive which provide a fascinating window on Mayo life from 1908 through to 1960. Two highlights of the programme include a film on the Foxford Woollen Mills in the late 1940s which will stir up happy memories for those who have lived and worked in the area; while the 1908 film of whalers on Iniskea gives an extraordinary insight into a disappeared trade and way of life.

Waters of Providence (1947), made by renowned photographer Fr Francis Browne SJ, tells the story of the Foxford Woollen Mills’ unlikely foundation through the determination and vision of Irish Sister of Charity, Mother Agnes Morrogh-Bernard, and documents the thriving industry at the mill at the time the film was made. A proud film of local achievement, it celebrates the hope the mills brought to the lives of local people and the jobs that helped people stay in the area.

The whaling station on Iniskea only opened in 1908, but it was that year that the celebrated early filmmaker R.W. Paul visited the Islands to make what was one of the earliest documentaries made in Ireland. Whaling Afloat and Ashore features dramatic footage of harpooning a whale at sea followed by whalers processing the enormous carcass on shore to make whalebone and oil. The recreational pursuits of the Irish and Norwegian employees including dancing, games and wrestling, are also captured by Paul giving an insight into the character and social life of the workers, in addition to their trade.

Tickets for A Mayo Ciné-Concert 5th February at 8pm cost €10 and are available now from the Linenhall Arts Centre Box Office on 094 902 3733. More information is available www.thelinenhall.com