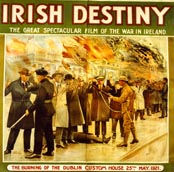 IFI International, with the support of Culture Ireland, is teaming up with cultural partners across the EU to mount a major programme of Irish film during Ireland’s EU Presidency running from January – June 2013. This wealth of activity includes screenings of historic Irish films from the IFI Irish Film Archive accompanied by scores from contemporary Irish composers in Paris, London, Berlin, Madrid and Brussels; a major focus on Jim Sheridan featuring both his work and influences; a season of the best contemporary Irish documentary; programmes of Irish shorts, and much more.

Sunniva O’Flynn, IFI Curator, said ‘While continuing to service over 40 festivals of Irish film around the world during 2013, we are bracing ourselves for an exciting 6 months in Europe when, thanks to the generous support of Culture Ireland, we will bring a range of contemporary and historical films from the Irish cinema canon to new audiences. It’s a pleasure to work again with Jim Sheridan and to present the films which have inspired and influenced him which will appear in his carte blanche selection at the Belgian Cinematek. We particularly welcome the chance to bring a series of cine-concerts to prestige European venues where the talents of contemporary Irish composers Mícheál Ó Súilleabháin, Niall Byrne and Bernard Reilly will complement the achievements of directors from the silent era.’

Presented on St Patrick’s Day in Brussels, George Dewhurst’s 1926 film, Irish Destiny, is a love story set against the backdrop of the Irish War of Independence. Released to mark the 10th anniversary of the Easter Rising it was the first film to dramatise the War of Independence and was for many years believed to be lost until a nitrate print was repatriated to the IFI Irish Film Archive where it was restored. Accompanied by an acclaimed original score from Mícheál Ó Súilleabháian, conducted by Proinnsías Ó Duinn and presented at Flagey (in Brussels’ famed art deco Maison de Radio building), Irish Destiny will be a remarkable opening to IFI International’s slate of programmes in Europe.

One of Ireland’s finest and internationally successful filmmakers, Jim Sheridan has throughout his career married his distinctively Irish artistic voice with a truly international set of influences and inspirations. From the 22ndof March at the Cinematek in Brussels, IFI International will present a two-pronged retrospective that includes most of Sheridan’s own films alongside a series of international works, curated specially by Sheridan himself, which influenced him at various points in his career such as Martin Scorcese’s Raging Bull which influenced Sheridan’s political drama The Boxer and Elia Kazan’s A Tree Grows in Brooklyn that influenced his semi-autobiographical collaboration with his daughters, In America.

A huge success both at the National Concert Hall and Lincoln Center, New York in 2011, Denis Johnston’s Guests of the Nation will screen at the new Barbican Cinema in London on April 14th. Based on a Frank O’Connor short story about the unexpected friendship between British soldiers and their IRA captors, this 1936 silent film will be accompanied live by Niall Byrne’s magnificent new score conducted by David Brophy.

Irish documentary has been one of the industry’s great success stories over the past decade. During the EU Presidency Bozar in Brussels and the Leuven Institute for Ireland in Europe will present a selection of the best recent Irish documentaries such as The Pipe, His & Hers, Lón sa Spéir/Men at Lunch as well as older films that point to a fine tradition of Irish factual filmmaking such as Peter Lennon’s 1967 Rocky Road to Dublin.

Willy Reilly and his Colleen Bawn, John McDonagh’s extraordinary silent love story set against a backdrop of 18th century sectarianism and made in 1919 during the strife of the Irish War of Independence. Accompanied by the Cine Theatre Ensemble playing Bernard Reilly’s original score the film will tour from the 8-12th June to some of the most prestigious cinemas in Europe; the Kino Babylon in Berlin on the 8thJune, the Cinema le Balzac in Paris on the 10th June, and the Cine Doré in Madrid on the 12th June.

Alongside these highlights there will be plenty of other Irish film activity; The Irish Film Festival of Oulo will feature an Irish Film Week; the Fantastic Film Festival in Brussels will feature a series of Irish horror films and back home, with the support of the Arts Council, IFI National will tour a programme of films exploring the relationship between Ireland and Europe to libraries and arts centres around the country.

IFI National’s tour of European work in Dublin is supported by the Arts Council Local Partnership Scheme in addition to the Arts Council financial support for the Irish Film Institute as its principal funder.

For more information, images and interview requests please contact Patrick Stewart at the IFI Press Office on 01 679 5744 or email pstewart@irishfilm.ie