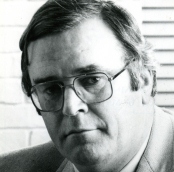 “I often wanted to write about Tiernan but never found the right way to talk about the vast activity of his life.  All this activity went on alongside a film making life. As well as being a well known commercials director, Tiernan loved the films of Costa Gavras and Francesco Rosi and wanted to make big political films. In 1978, his short film “Christmas Morning” was selected for competition at Cannes, but I think after that he was plunged into the urgency of Irish film politics and so he moved away from the idea of being a director to devote himself to being a supporter of other film makers. He was a positive force in Irish life and a crucial voice in the creation of Irish cinema” – acclaimed director and filmmaker, Pat Murphy, writes about Tiernan MacBride in her moving memoir.

Find out more on IFI Tiernan MacBride Library on our website.