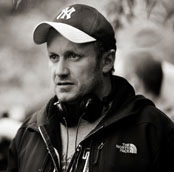 The IFI is delighted to announce that Mendel Walzman, a short film by Lenny Abrahamson filmed in the IFI buildings in 1987 will be screened as part of  its Focus on Lenny Abrahamson. Recently rediscovered by Abrahamson, it is an intimate record of his maternal grandfather telling the story of his  upbringing in Poland and his service in the Polish arm, before moving to find work in Belgium before finally settling in Ireland.

Lenny Abrahamson said ‘Mendel  Walzman was the first thing I ever shot on film – with excess bits of reversal stock given to us by RTÉ. I had made a few tiny things on video in TCD – none of them had a life outside the college. It was a time when I had begun to get interested in my grandfather’s background, and the lost world of Jewish Poland. I wanted primarily to record my grandfather’s stories and his extraordinary accent!’

Mendel Walzman will be shown before the screening of Garage on Sunday October 7th at 1pm.

Lenny Abrahamson will take part in a Free Public Interview on Saturday October 6th at 4.30pm. This illustrated interview will explore the breadth of his career in film and will also showcase a selection of his directed commercials.