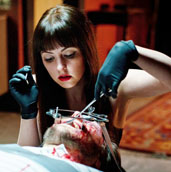 Five days of thrills, chills and spills in store as IFI Horrorthon returns from 25th-29th October, boasting the genre’s scariest, bloodiest, and best; including a special guest appearance from ‘scream queen’ star Danielle Harris, the Irish horror breakthrough Citadel, a long-awaited look at the extended Nightbreed: The Cabal Cut, amateur surgery antics in Excision, the story of The Shining in Room 237, and a first look at Brandon Cronenberg’s Antiviral.

IFI Horrorthon has spent the last year collecting some of the most twisted fantasies ever committed to celluloid from across the world and returns once again as easily the most frightful festival on Ireland’s cinema calendar. The packed programme of 32 spine-tingling features has more new horror films than ever before with 23 Irish Premieres. There are sneak previews of upcoming releases, the pick of the international horror scene, genre classics back on the big screen and special guests including Danielle Harris, a veteran ‘screen queen’ as IFI Horrorthon Guest of Honour.

This year’s Opening Film is the Irish premiere of Antiviral, the debut feature by Brandon Cronenberg (son of David) which premiered in Cannes earlier this year. In a dystopian future, the celebrity-obsessed populace clamour to be injected with the ailments of the stars. Be prepared for plenty of injections, bodily fluids, weird plotlines and a definite sense that young Brandon is infected with his father’s artistic impulses. Behold the birth of a body horror dynasty!

IFI Director Ross Keane said ‘This year’s IFI Horrorthon promises to be one of the best ever. The programming team has managed to pack in more premieres than ever before and we’re delighted to be joined by some really special guests. It’s great to see Ciarán Foy’s Irish horror Citadel making such an impact on the international festival circuit and we’re very pleased to be hosting the Dublin premiere. And of course we’re delighted that Danielle Harris will be presenting the Irish premiere of her directorial debut Among Friends in a programme that is really strong on female horror voices.’

Since she made her big screen debut in Halloween 4, Danielle Harris has become one of the most popular actresses in Horror starring in many of the Halloween and Hatchet franchises. The first ‘scream queen’ to visit IFI Horrorthon, Danielle Harris’ presence underlines the growing importance of female artists in horror, a trend evident throughout this year’s programme. In particular we’re pleased to present her directorial debut Among Friends that tells of a dinner party that goes wrong when the hostess decides it’s time to make her guests pay for their wrongdoings. Danielle will introduce the film and take part in a Q+A. She’ll also introduce screenings of genre classics Halloween 4 and Shiver and will add a touch of grisly glamour to the IFI Horrorthon long weekend.

Citadel is one of the best and most awarded of Irish horror films in some time; an urban horror story in which a grieving husband must protect his daughter from violent neighbourhood children. The film premiered at the Galway Film Fleadh, picking up the Best First Irish Feature Award and has since won a string of awards at film festivals around the world. Director Ciarán Foy will introduce the film and take part in a Q+A.

Film fans craving some amateur surgery and body modification won’t be disappointed; there are  two excellent films with female protagonists supplying exactly that. Excision, undoubtedly one of the year’s best horrors, is a dark and disturbing tale of a social misfit with twisted dreams of a career as a surgeon which, needless to say, she starts to make a reality. American Mary by the Soska Sisters tells the story of someone who, in contrast to Excision, has the training (she’s a disillusioned medical student) but starts using her skills in the underground world of extreme body modification.

Other highlights of the IFI Horrorthon for this year include; a preview of Room 237, the widely admired documentary by Rodney Ascher about Kubrick’s The Shining (which will be re-released in a new version at the IFI from 2nd November); Sleep Tight, which sees the co-director of [Rec] pitch a misanthropic and increasingly obsessed concierge against a naturally positive tenant; and an extended and vastly improved ‘The Cabal Cut’ version of Clive Barker’s Nighbreed that will close the festival.

Finally of course there’s the Surprise Film; tickets don’t hang around long for those wanting to see Dublin’s best kept secret. This is always one of the most highly anticipated films and the rumours are flying but, as usual, the IFI Horrorthon team are saying nothing until the projector starts to roll.

Tickets for IFI Horrrorthon are available now from the IFI Box Office on 01 679 3477 or online at www.ifi.ie. Individual tickets cost €9 (€10 for the Opening and Closing Films) range of special festival passes from 1-5 days are available on the phone or in person. IFI Daily Membership (€1) or IFI Annual Membership (€25) is required for all films.

For more information, images and interview requests with the IFI Horrorthon team and special guests Danielle Harris and Ciarán Foy please contact Patrick Stewart at the IFI Press Office on 01 679 5744 or pstewart@irishfim.ie.

18.15 Halloween 4: The Return of Michael Myers –Introduced by Danielle Harris