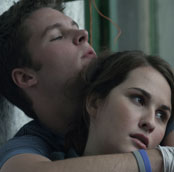 Five Stars for What Richard Did

What Richard Did looks set to be one of the most important and talked about Irish films of recent years. This powerful, low-key drama from the director of Adam & Paul and Garage is loosely based on the book Bad Day in Blackrock by Kevin Power and has picked up rave reviews from the Irish film critics. In her five-star review in The Irish Times Tara Brady said ‘a greatly needed antidote to an entire hysterical history of delinquent youths on screen’.