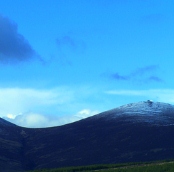 “My visits to Julius Ziz and his family were filled with many conversations about local Irish folklore and it’s almost palpable presence embodied in the surrounding myth-laden landscapes of the Burren. This inevitably fed into our idea of collaborating on a project that would somehow draw upon Irish myth, and once we encountered the work of John Moriarty it was only a matter of time before those conversations would evolve into the film that became Dreamtime, Revisited” – Dónal Ó Céilleachair’s blog on the creative process behind his latest film.
Dreamtime, Revisited opens from October 12th to 18th, exclusively at the IFI.
There will be a post-screening Q&A with co-directors Dónal Ó Céilleachair and Julius Ziz after the 18.20pm screening on Friday Oct 12.