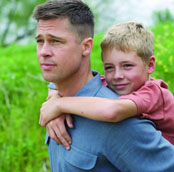 IFI audiences were asked to pick their favourite film from a shortlist of last year’s releases. The winner was The Tree of Life which narrowly beat The Artistand Senna into second and third places. The film will now receive a special screening on Saturday 15th at 20.40 as part of the IFI20 Open Weekend – two days of all FREE screenings to celebrate 20 years of the IFI in Temple Bar. The line-up is full of sneak previews such as Thomas Vinterburg’s award-winning The Hunt, major classics such as The Godfather and Singin’ in the Rain, and films from the IFI Irish Film Archive, Shamus and Rat.

Terrence Malick’s Palme d’Or winning The Tree of Life follows Jack’s progress from disrupted childhood through to disillusioned adulthood. At the same time the themes of his life are amplified through a sweeping look at Earth and the universe across millions of years, complete with lava flows, dreamscapes and dinosaurs. IFI Director Ross Keane who championed the film for the poll said ‘Love it or hate it, the film demands to be spoken about. Decide which side of the fence you’re on and stick to your guns, but for me, I was transfixed from start to finish.’

Celebrations will continue after the packed scheduleof films. There will be a barbecue with great deals in the IFI Courtyard and a free DJ-set in the IFI Café Bar for those who want to stay to raise a glass to the last twenty years of the IFI.These are just a few of the highlights and throughout the weekend there will be many more free screenings. Full details of all the films in the IFI20 Open Weekend can be found at www.ifi.ie/openweekend.

Other events in IFI20, celebrating 20 years of the IFI on Eustace Street at Temple Bar, continue until the end of September including a season of 20/20: Landmark Films at the IFI, tours of the IFI Irish Film Archive, a pop-up museum, and talks and special previews. Full details can be found at www.ifi.ie/ifi20.

Free tickets for each day will be distributed separately on Saturday and Sunday morning, in person at the IFI from 11am. Pre-booking by telephone or online will not be available. Each person in the queue will be allocated a maximum of four tickets per day. For example, a person queuing could choose four tickets for one film in order to bring friends or choose four tickets to individual films for themselves. Free tickets are strictly first-come-first-served and are subject to availability.