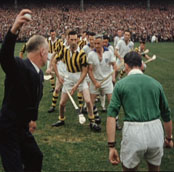 Replay the golden age of the GAA

This 2 DVD set includes rare footage from both the Hurling and Football All-Ireland Finals in Croke Park from an extraordinary era in Gaelic Games.These two hugely popular DVDs are now available to buy together for the first time, a perfect gift and a must have for any serious GAA fan and lover of Irish history.

The GAA Hurling Gold DVD featuring the All-Ireland Hurling Final Highlights from 1948-1959 includes both Cork and Tipperary’s three-in-a-row hurling victories, the great Wexford team of the mid ‘50s and Kilkenny’s legendary win of 1957. Fans will enjoy watching some of the greatest players ever to lift a camán, including Christy Ring, Eddie Keher and the Rackard Brothers. You can also see the highlights the last time the All-Ireland Hurling Final was replayed until the excitement of this year’s Galway-Kilkenny confrontation; the 1959 Waterford-Kilkenny final ended in a draw and the replay saw Waterford take the title.

Football fans will thrill to see the last victories of Cavan, Mayo and Louth, alongside famous wins of Dublin, Galway, Kerry and Meath in the 1950s. The GAA Football Gold DVD features the All-Ireland Football Finals of 1947-1959 and includes the rarely seen 1947 football match between Cavan and Kerry at the New York Polo Grounds.

The extraordinary atmosphere at Croke Park is well documented with capacity crowds being swelled by fence-jumpers, roof-walkers, canine pitch invaders, Bishops, Presidents and Taoisigh. The finals were occasions of huge national significance, the political and religious pageantry of the era are prominently highlighted, while the footage of supporters arriving in Dublin and families gathered around the wireless back home provide priceless records of the social history of the time. Much of the commentary is provided by the legendary Michael O’Hehir whose infectious passion for the game and humorous style give the films a powerful narration.

The films have been painstakingly re-mastered and digitised by the staff of the IFI Irish Film Archive, who preserved the original film reels in the climate-controlled vaults. The Archive holds thousands of reels of commercial and amateur footage, a moving image record of Ireland’s history from 1897 to the present. The IFI ensures that this rich resource is shared with the public in as many ways as possible including research access, public screenings, and events in Dublin, nationally and internationally. The release of key titles on DVD is another way to make this rich material available to audiences.

The DVD is priced €27.99 in person from the IFI Film Shop and all good DVD retailers. The film is also available for home delivery from www.ifi.ie €29.99 (including P&P).

For more information, interview requests and images please contact Patrick Stewart at the IFI Press Office on 01 679 5744 or pstewart@irishfilm.ie.