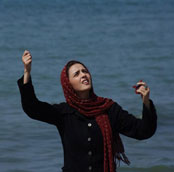 Five Star Friday For About Elly

Great reviews having been coming in thick and fast for About Elly, opening today exclusively at the IFI. Iranian Director Asghar Farhadi gained an international profile with A Separation last year when it picked up the Best Foreign Language Film Academy Award. About Elly, made in 2009, seems set to only enhance that reputation in Ireland with both The Irish Times and the Irish Independent giving rave  reviews.

Tara Brady of The Irish Times said ‘we get a drip feed of awful realisations that ultimately coalesce into a classic Twelve Angry Men showdown’ and ‘the film was voted the fourth greatest Iranian movie of all time…We’re not inclined to argue’  in her ★★★★★ review. At the Irish Independent Paul Whittington said ‘About Elly is a tremdous film, awash with sound, movement, atmosphere and raw emotion’ in his review that he also gave a full ★★★★★.

Go to the About Elly page more details and to book tickets.