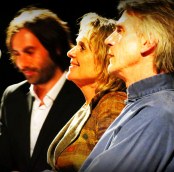 Kicking off our month-long IFI20 celebrations, last Saturday we took a trip down memory lane back to the 90s with IFI 1992 Day! We were delighted to welcome Jeremy Irons and Sinéad Cusack who partnered in Waterland, the very first film publicly screened at the IFI in its new home in Temple Bar. Screening as part of 20/20 Legacy Films season, Waterland was followed by the post-screening Q&A with our Guests and hosted by writer and film critic, Paul Lynch.

Also on Saturday many of you joined quiz master general Derek O’Connor for ‘Final Cut: The Ultimate IFI Movie Table Quiz’ – well done to all involved!