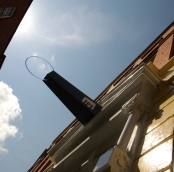 What are your memories of the IFI?

The IFI gets ready to celebrate 20 years in Temple Bar and is asking for your stories, photos and memories

This September, the IFI will be celebrating 20 years in its landmark premises, the old Quaker Meeting House at number 6 Eustace Street. In those years a lot has happened at the IFI; some met their heroes, some saw films that changed their lives (some saw it 8 times), some fell in love over an IFI Café Bar Burger, some came with their school and never really left, some got married there, some wised-up when they were stood up, some donated precious film reels to the IFI Irish Film Archive and some danced all night at Bert’s Disco.

As part of the celebrations the IFI is looking to hear all the stories from its audience to create an Archive of IFI Memories that will be preserved in our IFI Irish Film Archive and shared during the celebrations. To do that, we need to hear from you our audience.

Do you have a special memory of the IFI from the last 20 years (or before) that you’d like to share? Whether it’s a major life event that happened on the premises, a filmmaker you met, a photo you want to show us, or just reflections on a film that has stayed with you – the IFI wants to hear about it.

To get in touch, email your story to ifi20@irishfilm.ie and we promise we’ll get back to you.