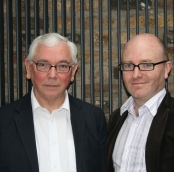 Terence Davies visit to the IFI

As part of the Darklight Festival, the IFI & Darklight were delighted to welcome Terence Davies to present a selection of his work.

Davies began his career as part of a generation of British Film Institute-sponsored nascent directors that included Peter Greenaway and Sally Potter; however, while his contemporaries have largely lapsed into self-indulgence, Davies is regularly fêted as Britain’s greatest living filmmaker.

This event was presented in partnership with Darklight, as part of the Darklight Festival (August 23rd – 26th).