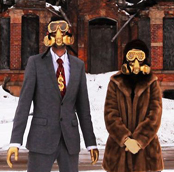 Special Guests lined up for IFI Stranger Than Fiction

Special guest line-up for IFI Stranger Than Fiction includes the director of thrilling new U.S documentary The Imposter, the director of Very Extremely Dangerous on rock’n’roll outlaw Jerry McGill, and the director of new boxing doc The Gentleman Prizefighter about ‘Gentleman Jim’ Corbett, one of the greatest boxers who ever lived.

IFI Stranger Than Fiction is just around the corner with four days of the finest documentary films made in Ireland and around the world taking place from this Thursday 16th to Sunday 19th August. With the final preparations for the festival now in place, the IFI is delighted to announce the line-up of special guests who’ll be introducing their films and taking part in post-show discussions.

Bart Layton may be a first-time feature director but his stunning debut The Imposter has made a massive impact at festivals around the world. Bart will attend the Gala Festival Opening on Thursday 16th at 7pm and take part in a Q+A after the film. This is your chance to get a sneak preview of the film before its much-hyped upcoming release. True-to life stories don’t get more thrilling or perplexing than this story of an adult Frenchman who successfully passes himself off as a 16 year-old Texan, who has been missing for three years. Full of twists and extraordinary revelations, The Imposter is a must-see.

Paul Duane had a recent critical success with Barbaric Genius and he returns to the IFI on Saturday the 18th  at 5.30pm to present his new film Very Extremely Dangerous. Former rock’n’roller Jerry McGill from Memphis had a hit in 1959 with Lovestruck but fell out of the music scene and in to a life of crime. Recently released from prison and in ailing health he’s determined to make it back to the studio to record one more LP. But as Paul Duane soon found out Jerry is no reformed character and, with the camera giving him the attention he craves, this ex-con is seemingly hell-bent on self-destruction.

IFTA Award-winning director Andrew Gallimore captures the post-Olympic boxing fever with his new documentary The Gentleman Prizefighter, which he will discuss after the screening on Saturday the 18th at 1.20pm. Liam Neeson narrates the story of Irish-American boxing legend James J. Corbett, nicknamed ‘Gentleman Jim’, whose scientific style revolutionised the sport in the late 19th Century. After hanging up his gloves he found a talent for acting and became an early silent movie actor. Don’t miss the fascinating story of one of the biggest celebrities of the age and a boxing champion to rival even Katie Taylor.

For festival-goers looking to discuss documentary in more depth don’t miss August’s FREE Afternoon Talk on Documentary. Festival Programmer Ross Whitaker (filmmaker and Commissioning Editor of Film Ireland) will lead a informal discussion on Documentary and will be joined on the panel by Bart Layton and Paul Duane.