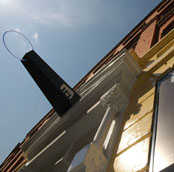 Get involved in IFI20 this September for a month-long celebration of two decades of the IFI’s home in Temple Bar including a season of films that shaped the IFI, an IFI Open Weekend of FREE screenings, a nostalgic day of all things 1992, a pop-up museum in the IFI Irish Film Archive, talks, interactive tours, an Oscar and a party!

This September, the IFI will be celebrating 20 years in its landmark premises, the old Quaker Meeting House at 6 Eustace Street. Things have changed a lot in Dublin since the projectors started rolling at what was then known as the IFC, in a Temple Bar that was only starting to be regenerated. A lot changed at the IFI too. No longer a young pretender, the IFI is now acknowledged as one of Dublin’s key cultural institutions and the home of film culture in Ireland.

In the last two decades the IFI has seen over 3.1 million cinema attendances to see 63,000 screenings of over 5900 different films. The most popular of those films was The Diving Bell and the Butterfly with 11,000 attendees in 2008, and which narrowly edged out the previous IFI favourite Crouching Tiger, Hidden Dragon. The IFI Café Bar has been kept busy serving over 1.78 million cups of tea and coffee to audiences that include over 8,000 members. The IFI Irish Film Archive is now preserving 611 different collections with over 26,000 cans of films, the oldest of which, a Lumiere brothers film of Dublin and Belfast, dates back to 1897.

Ross Keane, IFI Director, said “The IFI’s home in Temple Bar is all about the people who come here to engage with our extensive programme, so when we started to plan our anniversary celebrations, we quickly decided that we wanted the focus to be on our audience. We want to celebrate the experiences that our audiences have had here over the last 20 years by reliving some of the big moments whilst also looking to the future.”

IFI20 will kick off with a day of all things 1992 on September 1st featuring a screening of the first film ever shown at the IFI, Waterland,with special guests Jeremy Irons and Sinead Cusack in attendance. You can also remind yourself of what else people where going to see in other cinemas in 1992 with a nostalgic screening of Wayne’s World. Throughout the day you can avail of 1992 prices on tea and coffee, join in a free table quiz celebrating all things film and nineties, the first twenty people through doors of the IFI that day and who were born in 1992 will be given free IFI Membership.Later in the month there will be another much-loved film from 1992, Far and Away, shown as a free outdoor screening in Meeting House Square.

One of the big highlights of the month will be the IFI20 Open Weekend on September 15 and 16th; a double edition of the annual IFI Open Day that will see two days of nothing but free screenings. There’ll be sneak previews of major new autumn releases, classics, family films, and the winner of an audience poll selecting the IFI audience’s favourite film of the last year. The full Open Weekend programme will be announced in early September. And no celebration would be complete without a Party, so watch out for the IFI Barbeque and a late-night DJ set during the IFI20 Open Weekend!

Running throughout the month is an IFI Legacy Films Season, twenty of the most significant films the IFI has shown in the last twenty years including breakout IFI hits like When We Were Kings and Into Great Silence; and IFI firsts such as the first film we showed in 70mm,Vertigo. The screening of Vertigo will precede a major season of the full canon of Hitchcock’s 52 films later this year.

The IFI Irish Film Archive is also celebrating the 20th anniversary of its home in Temple Bar. There will be a Pop-Up Museum in the IFI’s Tiernan MacBride Library, Archive Tours of the special climate controlled vaults, and the Archive’s Oscar and Emmy statuettes (the Oscar was donated by a former Irish winner, Set Designer Josie MacAvin) will go on permanent display. There will be a special month-long series of the IFI’s free Archive at Lunchtime screenings featuring twenty short Irish films, one from each year since the IFI opened at Eustace Street. Our Monthly Must-See Cinema screening will also be celebrating with a special screening of Broth of a Boy, a 1959 comedy featuring Barry Fitzgerald.

To create a cultural landmark you need a landmark building and twenty years ago the IFI was lucky enough to be able to take over the Old Quaker Meeting House. The stylishly converted building, that still retains much its rich heritage, will be celebrated with an Interactive QR Code Tour and two Afternoon Talks, one from the Eustace Street Quakers and one by the IFI’s award-winning architects O’Donnell + Tuomey.IFI Education will be celebrated with a Family Screening of Short Films and the launch of Film Focus, a major research report on film education practices in Ireland.

If that’s not enough there’ll be plenty more with a specially commissioned set of IFI Illustrations, a special audience edition of the IFI monthly film club The Critical Take, and a series of 20 blogs throughout the month written by guest contributors.

The month will end with a Gala Closing Night and the European premiere of a major new Irish film release.

Many of the IFI20 events will be available through the IFI Box Office on 01 679 3477 and online at www.ifi.ie. To learn how to get hold free tickets to the IFI20 Open Weekend, keep an eye out for details on the website in the coming weeks.