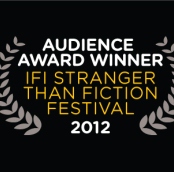 Four days, ten films, special guests and eye-opening documentaries from all around the world – this year’s edition of IFI Stranger Than fiction, Dublin’s Documentary Film Festival has been a great success! Featuring stories of conflict and culture, politics and poetry, music and sport, our 10 films have mesmerised the Festival Audience who were keen to vote for their favourite films in our Audience Poll.

All your votes have been meticulously collected and recorded, our colleagues from the Box Office did the maths and we are happy to announce that 5 Broken Cameras is the winner of the IFI Stranger Than Fiction Audience Award!

Read a blog review on this film by our Festival critic Marcus O’Sullivan.

Thank you all for your votes!