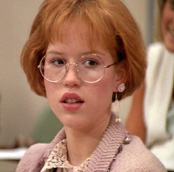 Teenage Kicks: American Teens on Film at the IFI

The IFI presents Teenage Kicks: American Teens on Film, a season that traces teenagers on screen since they emerged as a distinct social group with the baby boomer generation. At first provoking a moral and social panic that cast them as delinquent rebels, decades of rock ‘n roll culture brought teenagers into the cultural mainstream and a marketplace keen to harness their growing spending power as consumers. By the 1980s, the idea of the teenager as a separate tribe with their own needs and culture was deeply embedded in American culture and film.

Rebel Without a Cause (1953), featuring James Dean in his iconic role as 17-year old Jim Stark, was massively influential and set the bar for teenage films to this day. The fantasy ‘family’ Stark creates at his new high school with the beautiful Judy (Natalie Wood) and lonely Plato (Sal Mineo) and the tragic result show the growing alienation from the older generation and increasing desire for teens carve out their own social groups.

The definitive image of 1970s teenagers was made through the nostalgic melancholy of the 1990s in  Richard Linklater’s Dazed and Confused (1993). The film follows a cross-section of high school students on the last day of term in Texas. Featuring an early appearance from Matthew McConaughey, it’s a warm and witty film with a universal resonance.

The 1980s were the golden age of teenage films and the genre exploded in popularity. John Hughes captured the teenage voice with an insight and authenticity unmatched in over half a dozen films between ’82 and ’87, represented here by the greatest of them The Breakfast Club (1985) as well as Pretty in Pink (1986) (that Hughes wrote and Howard Deutch directed).Holding a mirror to the darker side of American youth in the 1980s was Tim Hunter with River’s Edge. Showing the aftermath of a murder, it’s a chilling story of moral apathy and indifference – one of the most authentically powerful of the genre.

In the 2000s Nanette Burstein turned a documentary camera on a group of Indiana high school students across the course of a year in American Teen (2008), exposing five very different teenage personas but showing, above all, the intense pressure placed on them to meet social expectations. Also screening from that decade is Thirteen, Catherine Hardwicke’s story of teenage experimentation given an edgy slant with the involvement of 13 year old co-writer Nikki Reed.

The season ends with the extended cut of Kenneth Lonergan’s Margaret (2011), a brilliantly sprawling story of teenage angst and responsibility. Anna Paquin turns in a memorable performance as Lisa trying to reconcile her precocious eloquence and immaturity as the New York teenager whose seemingly inconsequential actions give rise to grave consequences.

For more media information and images, please contact Patrick Stewart at the IFI Press Office on pstewart@irishfilm.ie or 01 679 5744.