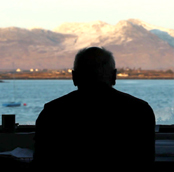 There’s a long and distinguished history of critics turned filmmakers including greats such as Truffaut, Wenders and Bogdanovich. To this illustrious canon add Pat Collins, Cork polymath, editor of the late, lamented Film West magazine and a former programmer of the Galway Film Fleadh. He made his first remarkable documentary in 1999 and hasn’t stopped since, producing consistently stunning documentaries at a breathless rate. The IFI will present a broad mid-career retrospective from the 4th-21st of August that showcases many of his features as well as a selection of his short works and which coincides with the release of  his first fiction feature Silence which screens from 27th July.

Collin’s eclectic filmography offers a series of deeply revealing artistic portraits, psycho-geographical topographies of Irish places, and experimental mood pieces. There’s a particular focus on rural living and those quiet rebels who, like the filmmaker, have a unique way of seeing.

One of the highlights of the season is 2011’s Tim Robinson: Connemara, Collins take on Robinson’s massively popular trilogy exploring the wilds of Connemara. The two men have kindred artistic souls, both sharing a profound, lyrical and heartfelt connection to the Irish landscape. There’s another exploration of place in Oileán Thoraí  (Tory Island in Donegal) from 2001, somewhere Collins would return to a decade later in his new release Silence, a deeply immersive meditation on places free of man-made noise.

Collins’s portraits of artists in documentary demonstrate a considerable ability to capture some of the deepest and most personal parts of their character. His acclaimed Gabriel Byrne: Stories From Home sees the Walkinstown lad turned international film actor recount the events that have defined him with unstinting candour and a wry sense of humour. The season also holds a number of shorter portrait gems including Abbas Kiarostami: The Art of Living, Nuala Ní Dhomhnaill:Taibhsí I mBéal na Gaoithe, and a particularly revealing portrait of one of Ireland’s finest modern writers in the final year of his life in John McGahern: A Private World.

Pat Collins will be interviewed by Derek O’Connor at the IFI on Tuesday 14th August at 18.30.

Silence is on release at the IFI from 27th July

Tickets are available from the IFI Box Office on 01 679 3477 or online at www.ifi.ie. Tickets are at normal IFI prices except for the Shorter Works which are priced at €5 each. The Pat Collins Interview on August 14th is FREE but ticketed.