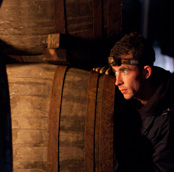 This weekend there’s a great opportunity to see long-time Ken Loach collaborator, screenwriter Paul Laverty, discussing The Angels’ Share  after the 18.30 screening on Saturday 2nd June. The Angels’ Share is an acclaimed new Loach film that just days ago was awarded the prestigious Jury Prize at the Cannes Film Festival. Following a set of outsiders becoming involved in the Scottish Whisky industry, the film has been praised for an uncharacteristically optimistic sentiment for one of Loach’s films.

Paul Laverty has collaborated with Ken Loach on many of his films over the past 16 years including Sweet Sixteen, Ae Fond Kiss…, Looking for Eric, and The Wind that Shakes the Barley.