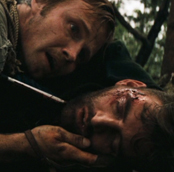 On the 40th anniversary of its release, John Boorman’s classic thriller Deliverance packs as powerful a punch as ever, particularly when seen, as it will be by many for the first time this July, on the IFI’s big screen in glorious 35mm. The acclaimed Wicklow-based director, whose extensive body of work includes Point Blank, Excalibur and The General will attend and introduce the screening.

An Academy-award nominated masterpiece, Deliverance recounts the gruelling psychological and physical journey taken by four city slickers down a river in the backwoods of Georgia. Following an up-beat but ominous encounter with a banjo-playing hillbilly their watery idyll is soon shattered and their trip takes on the quality of a squeal-filled nightmare. The film reveals men’s darkest fears of shame and degradation, and explores the violence of which even the most civilised are capable. Deliverance features excellent performances from ‘70s icons Burt Reynolds and Jon Voight, and fine solid support from Ronny Cox and Ned Beatty.

Film Archive collections. This month’s title comes from John Boorman’s own film collection which is preserved in the climate-controlled vaults of the IFI Irish Film Archive.

For more media information and image requests about the 40th Anniversary Screening of Deliverance please contact Patrick Stewart at the IFI Press Office on 01 679 5744 or email pstewart@irishfilm.ie.