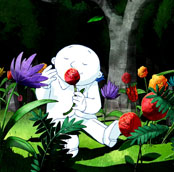 For four action-packed days, the IFI Family Festival 2012 will capture the musical magic of the movies, investigate the science of filmmaking and take you on a trail of Irish animation.

This exciting Festival programme is full of the best family films from all around the world. Characters in the Festival include a blue tiger from the Czech Republic, a flying piano, a little werewolf from the Netherlands, a Moon Man, and the Gruffalo’s child. There’s plenty of Irish premieres and in most cases the Festival is the only chance for families to see these brilliant films on the big screen in Ireland. Alongside film screenings there is also a fantastic range of workshops, special events and a tailor-made Animation Trail allowing families to get behind the scenes and see how Ireland’s world-famous animation companies put it all together.

The Festival’s Opening Night starts with The Sound of Film Music, a special interactive music event with composer and performer Morgan Cooke. He’ll be creating film songs and music with the audience before a double-bill of wonderful musical shorts The Magic Piano & The Missing Key (6+) which will be opened by RTÉ Young People’s Diana Bunici. The Magic Piano, an Oscar-nominated puppet animation, sees two Warsaw twins find an enchanted flying piano and whisks them off on an adventure. The Missing Key tells the story of young musician Hero Wasabi competing in a music contest against villainous Count Telefino who will do anything to win.

Irish animation is a huge success but many fans don’t realise that The Octonauts, Ballybraddan, Roy and many other animations are made right here in Ireland. The IFI Family Festival and some of the best Irish animation companies have put together an Irish Animation Trail to allow families to see how they’re created, watch them on the big screen, and meet some of the animators. Running at different times throughout the festival, the Irish Animation Trail is a great way to introduce children to how animated films are created and open their eyes to an industry that Ireland is becoming a leading player in.

There’s plenty of animation in the film screenings too, including Moon Man (7+), an animated feature from Schesch Filmkreation and coproduced by Kilkenny-based Cartoon Saloon. Based on the bestselling Thomas Ungerer books, Moon Man will be receiving its world premiere at the Festival – follow the lonely Moon Man as he hitches to earth on a speeding comet.  The Blue Tiger (7+) from the Czech Republic mixes live action and animation in a tale about a pair of children (and their mysterious blue tiger) protecting their beloved botanical garden from an evil mayor who wants to develop it.

Featuring one of the best loved characters from children’s books The Gruffalo’s Child (4+) is the follow up to the Oscar-nominated adaptation of The Gruffalo that was a big success at last year’s Festival. The giant beast is now living in a cave with his daughter. The story starts as she decides to venture out and meet the animals. After the film Catherine McGuinness from the National Museum of Ireland – Natural History will give a talk on Ireland’s woodland animals – don’t forget to dress up as your favorite woodland creature, and watch out for the bear!

Alfie, the Little Werewolf (7+) and Kauwboy (10+) are two very different films from the Netherlands screening on Friday 7th July. Set on the moon-lit eve of his seventh birthday, the hero of comic fantasy Alfie, the Little Werewolf suddenly find’s he’s covered in fur and has to adjust to his adventurous new life as a young werewolf. Kauwboy (10+), one of the IFI team’s favourite films in the Festival, is the touching story of ten-year-old Jojo who lives with his father and isn’t sure where his mother is, believing she’s a singer in the U.S. He finds a young jackdaw fallen from the nest and in caring for it forgets his troubles for a while – but they don’t entirely go away.

Dealing with themes of integration, The Quiet One (6+) is set at a Swedish school attended by children from all over the world. Maryam from Iran finds it hard to settle in but gradually she starts to make friends and once she builds up her confidence a big smile just won’t leave her face. This screening will be followed by a workshop on ‘Silence and Sound’ with yoga teacher and animator Siobhan Twomey.

Short Tales (Programme 1 4yrs+, Programme 2 8yrs+), showcase a fantastic selection of the latest short family films and will be a definite highlight of the Festival. In Programme 1, specially selected for very young viewers, there’s a determined blackbird, a little pig, and a boy with missing teeth – the perfect way to introduce youngsters to the cinema experience. In Programme 2 light-hearted stories blend with more serious concerns, giving plenty to engage older viewers – this year the selection includes an Irish 3D animation world premiere!

The closing night film of the Festival is Kiwi Flyer (8+), a thrilling story from New Zealand about the highlight of the Kiwi summer, the trolley derby – a go-cart race to us! Twelve-year-old Ben is desperate to beat class bully, Shannon. With determination and the help of his friends he builds ‘The Kiwi Flyer’. But is it good enough to win?

The Festival always has an opportunity for children to learn about different aspects of filmmaking in a hands-on way and this year is no exception with a great set of workshops focusing on themes of film soundtrack and digital art, and in association with Dublin City of Science 2012, science and innovation.  Make Some Noise! (9-12yrs) is a two-day workshop with composer and performer Morgan Cook looking at how to create your very own soundtrack. Dublin based designers and programmers MIDAspace will help participants illustrate, design and project an animated light sculpture in ‘Light Entertainment (10-12yrs), and over two days will transform the workshop space into a digital playground. Inspect-the-Gadget! (8-12yrs) teaches the basics of sci-fi model making while for younger Festival goers there’s Sci-fi Pop-ups (5-7 yrs).

Please note: films which have not been classified by the Irish Film Classification Office are given an age recommendation by the IFI. For more information please contact us. Children under 12 must be accompanied by an adult in the cinema.

followed by workshop on ‘Silence and Sound’ by Siobhan Twomey

*Subtitles will be read aloud by an experienced reader.

Please note: films which have not been classified by the Irish Film Classification Office are given an age recommendation by the IFI (indicated above next to film title). For more information please contact us. Children under 12 must be accompanied by an adult in the cinema.