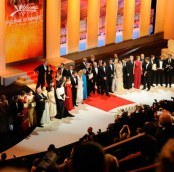 Winners of the Cannes Film Festival 2012

The winners of the Cannes Film Festival have been announced!

Michael Haneke snapped up his second Palme d’Or for Best Film with Amour. The Grand Prix went to Matteo Garrone’s Reality. The Jury Prize was awarded to Ken Loach for The Angels’ Share (opening this Friday at the IFI).

The Camera d’Or for Best Debut Film went to Behn Zeitlin for Beasts of the Southern Wild. Carlos Reygadas was awarded Best Director for Post Tenebras Lux. Best Screenplay went to Romanian film, Beyond the Hills. Best Actress was jointly awarded to Cosmina Stratan and Cristina Flutur, who starred in Beyond the Hills. And Best Actor was awarded to Mads Mikkelson in The Hunt (read IFI Director Ross Keane’s review of the above in our exclusive blog).

The Special Jury Prize went to Le Grande Soir by Benoit Delepine. A Special Distinction of the Jury was given to DJECA by Aida Begic. And finally the Critics awards included Sofias Last Ambulance, Gods Neighbors and The Wild Ones.