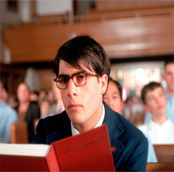 Writer-director Wes Anderson is arguably one of the foremost cinematic stylists working in American film today; his rigorous and distinctive aesthetic approach makes his films instantly recognisable. Look past the framing, colours and impeccable soundtrack, however, and you’ll find Anderson the artist is a desperate optimist with a heartfelt empathy for his oft-troubled protagonists. To celebrate the release of his new film Moonrise Kingdom on 25th May, that premiered to acclaim at the Cannes Film Festival just a few days ago, the IFI presents the complete set of Anderson features throughout June.

Bottle Rocket (June 2nd) started life as a 13-minute short (also showing) that sufficiently impressed for Columbia studio to bankroll the full-length version, Anderson’s debut feature. This sunny shaggy-dog story served as a handy calling card for Anderson, whose trademark style was already remarkably well developed. With his follow-up, Rushmore (3rd June), he really hit his stride, establishing himself as a major talent with this seminal school comedy of ill manners. Precocious blue-collar teen Max Fischer, as incarnated by Jason Schwartzman in his screen debut, is one of the great screen rebels and Rushmore is by turns unpredictable, droll, whip-smart and achingly tender.

The Royal Tenenbaums (16th June), Anderson’s dramatic comedy about a dysfunctional family of troubled geniuses is one of the key American films of the new millennium. A gleefully larger-than-life Gene Hackman excels as the disruptive paterfamilias with a formidable ensemble all struggling with the unresolved parental issues that blight so many of Anderson’s protagonists. A visual love-letter to New York City, and perhaps Anderson’s greatest work to date, the film begs to be seen on the big screen once more.

Anderson’s penchant for stylisation goes into overdrive with The Life Aquatic with Steve Zissou (June 22nd), an elaborate fantasia on the high seas. Bill Murray, a key figure in Anderson’s oeuvre, uses his patented brand of ennui as the eponymous oceanographer Zissou on an eccentric but magnificently realised mission to eliminate the ‘jaguar shark’. On something of a world tour, The Darjeeling Limited ((June 23rd) brings the trademark Anderson aesthetic and unresolved familial issues to India with an unlikely trio of estranged siblings, Owen Wilson, Jason Schwartzman and Adrien Brody, on a what’s meant to be a journey of self-discovery. However, all is not quite as it seems…

Fantastic Mr. Fox (June 24th), the season’s final film, is a faithful yet freewheeling adaptation of the Roald Dahl source material that fits perfectly with Anderson’s world. Our foxy hero (winningly voice by George Clooney) is torn between his past as a chicken poaching ne’er-do-well and his current life as an urbane family man. In the end, with Anderson, it’s always all about growing up.

For more media information and requests for interviews please contact Patrick Stewart at the IFI Press Office on 01 679 5744 or pstewart@irishfilm.ie